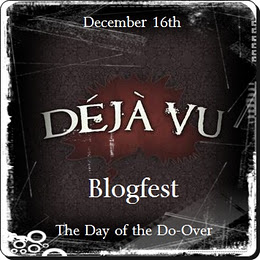 Hosted by DL at Cruising Altitude
On December 16th all of those taking part will re-post their favorite blog offering, or one that never received the exposure it should have.

This post originally appeared May of this year, but as I continue to get hits and comments, I thought repeating it would be good.

Writing From a Male POV

Writing from the point of view of the opposite sex can be challenging. Viewing the world from another perspective requires that we abandon our natural instincts. Since the books in my series, The Circle of Friends, featured a male lead, I had to understand the differences.

I read dozens of relationship books, seeking to comprehend the distinct qualities of the male gender. The books that provided me with the most insight were Men Are From Mars, Women From Venus and the Connecting With Your Husband/Wife series. Men and women really do view the world through different eyes!

- Men are not detail-oriented, at least not in the area of observation. They are focused on the big picture. When a man walks into a room, it’s doubtful he will notice the pattern on the couch or the smell of flowers by the window.

- Men tend to process information internally. While a woman will discuss her situation with friends, a man will privately think through his problems. Men tend to internalize rather than verbalize when seeking an answer. If he does discuss the situation, he wants answers not support.

- Because men normally do not discuss their problems, they use fewer words than women – by half! They tend to verbalize facts and opinions rather than feelings, too.

- Men focus better than women, who rely more on ‘diffused awareness.’ Once a man selects a course of action, little can distract him. While women multi-task with ease, men tend to focus on one thing at a time.

- Due to the amount of testosterone a man’s brain receives before he is born, he cannot think both logically and emotionally at the same time. Thus, when a man offers a logical explanation, a woman’s emotional reasoning simply doesn’t compute. And when a man grows angry, rationalizing with him is difficult as logic has gone out the window at that point.

- Men are not as emotionally expressive as their female counterparts. They are simply not wired in that manner.

While all of that may appear to be stereotyping, it does provide a fundamental base for the male POV. Environment, background, and basic personality type also factor into the equation.

Armed with this knowledge, I found writing from a male perspective much easier. It was refreshing to discard my women intuitions and interpretations and just deal with the basics. I’d say it was almost liberating!

Are you comfortable writing from the opposite sex's POV?

Today is the last day for the Christmas Special Giveaway!
at Friday, December 16, 2011