Working with a Cover Artist by Sandra Cox

First, I’d like to thank Diane for helping me get the word out on Mateo’s Blood Brother a sequel to Mateo’s Law then chat with you about working with cover artists.

When it’s time to market your book, deciding on a cover is one of the most important decisions you make. A cover can mean the difference between someone looking at your book or barely glancing at it before moving on to the next.

I’ve had a lot of great covers that have come out of the publishing presses I’ve signed with. All asked for my vision on creating the cover. Most have a limit on how much they are willing to change once the cover has been created. And that’s understandable. When you publish indie that cover is your only concern. When publishing with trad your cover is one of many. There’re pluses and minuses for indie and trad. Traditional and small press want your book to succeed so they’re going to do their best to make sure you have an attractive cover AND you don’t have the out-of-pocket expense of paying for it. But that doesn’t guarantee you’re going to get the exact cover you want. I had one trad cover, while it was okay, it was obvious the artist had never looked at my request sheet. There was nothing on the cover I’d requested.

Many indie authors create their own covers. There’re software packages like bookbrush.com that make this much easier than it used to be. For those that aren’t that comfortable with creating their cover or don’t have the time, there are a plethora of artists that create covers. Prices range from in the hundreds to under twenty. If you go by the dollar amount, you’d think the best covers are the highest price. I’m very pleased that hasn’t been the case for me.

I started out with an artist that charged just under a hundred if memory serves. The first cover I absolutely loved. The second I was okay with but asked for a change and she kindly told me I could make that one myself. Needless to say, at that point I started looking for a new cover artist. A fellow writer told me about Fiverr and I hopped right over. I tried a couple of artists there but I wasn’t satisfied with the covers. Then I discovered pixelstudio (at Fiverr) and I’ve been there ever since. They have a range of services starting at ten dollars. The process is pretty straight forward. You make your payment, pick out color and font and leave your specifications along with what background picture you want. For this you are sent to a commercial platform of licensed stock photos that pixelstudio has an account with to pick out your background picture. The downside is, it can be very time consuming. There have been times I’ve spent a couple of days looking for the background picture I wanted for my cover. On the upside, the covers are so reasonably priced if you decide, down the road, you want something different, you can go back and have another made quite cheaply. Turn around time is usually three days…

For the other Indie authors out there, where do you have your covers made? Or do you make them yourself? 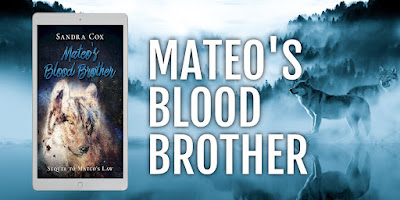 Behind the amicable façade is a man who’s tough and determined. He’s Mateo’s Blood Brother.

Blurb:
They were friends, close as brothers. Then they weren’t.
Mateo and Jesse are cautiously working their way back to friendship when Jesse discovers the unthinkable. Layla/Delilah, the sultry shifter who’d had affairs with both men, is still alive. The tumble she took over a mountain ridge—a fall that nearly killed Mateo—should have finished her.
Now, there’s no choice but for the two men to work together to take down a she-devil straight from hell. As the stakes escalate and the hunt becomes more intense, another wolf appears on the scene. Always where Jesse’s at. Always when he’s in trouble. Jesse is divided between ending Delilah, a new love interest, discovering the identity of a certain brown wolf and staying alive.
Available at Amazon

Excerpt:
“She’s alive.”
Mateo studied Jesse. The chief’s face stoic except for eyes that sparked with an emotion the sheriff couldn’t read. Still, it made him shift uneasily in his chair. Anxiety and fear pheromones rolled off Jesse. And Jesse didn’t scare easily.
The outside door banged open, distracting him. Boots clomped. A moment later, Adam stuck his head around the door. An aspiring attorney, the young man did their paperwork during the day and took classes at night. “Boss—”
“Later, Adam.” Mateo’s eyes never left Jesse.
“Sure, Boss.” Adam’s head swiveled from one to the other before he disappeared.
“Who’s alive?” The words were no sooner out of Mateo’s mouth when a premonition, so terrible it chilled his blood, hit him. Hard. The hair on the back of his neck rose. And he knew. Knew before Jesse uttered the word.
“Layla.”
On some level, he’d known before now. For a week, he’d been hearing eerie howling that set his teeth on edge and made his hackles rise. And the old wolf, his dad, and the wolf pup had been acting strangely. The old wolf always staring into the distance with his ruff on end and a continual low snarl rolling out of his throat. The pup cowering close to the old wolf. “That’s impossible. The fall killed her. Nearly killed me.”
“I saw her.”
“Saw her?”
“She was half-wolf. Half-human.” Jesse scrubbed his face with his hands.
“Shit.” Mateo’s extensive vocabulary limited this morning.
“She’ll be coming for you. You and Blair.”
“She won’t get her.” He growled. Literally growled.
“Down, wolf.” For the first time, Jesse smiled.

Award winning author, Sandra Cox writes All Things Western and more, is a vegetarian, animal lover and avid gardener. She lives with her husband, their dog and cats in sunny North Carolina. 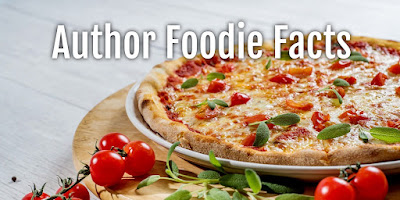 She spent a number of years in the Midwest chasing down good Southern BBQ. By the time she moved to North Carolina where Southern BBQ is practically a staple, she’d become a vegetarian.

Pineapple is a must-have on pizza, along with black olives and onions.

She loves pumpkin waffles or pancakes. Pumpkin cream cheese, not so much.

You can find her at: Sandra Cox, author / Cowboy Trivia / blog / Twitter 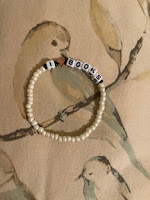 Last but not least, a funky little giveaway:
Our lovely hostess will draw a commenter out of the proverbial hat for an I ♥ Books beady bracelet.
Have a creative day.

What has been your experience working with a cover artist?
at Monday, April 25, 2022 14 comments: Before that though, it’s time for another edition of The Insecure Writer’s Support Group, founded by Ninja Captain, Alex J. Cavanaugh. 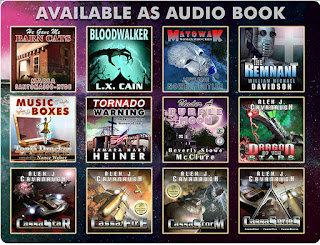 April 6 question - Have any of your books been made into audio books? If so, what is the main challenge in producing an audiobook?

Twelve of Dancing Lemur Press’ book are available in audio.
The biggest challenge is finding just the right narrator. There must be passion and personality in the voice.
We also must select just the right book. Several of our titles sell every month and a couple sell only a few each year.
Overall, we’ve been very pleased with our audio books! 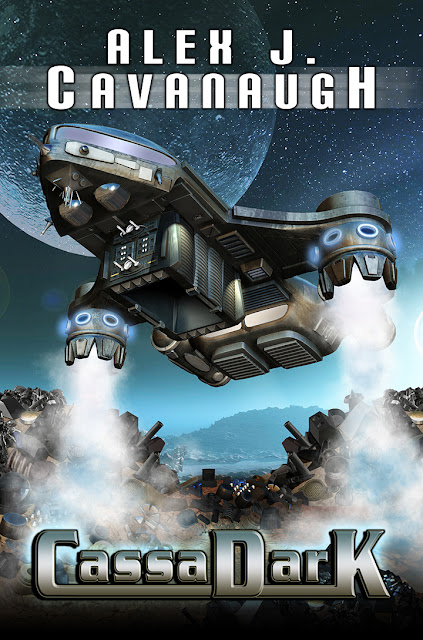 His world is unraveling…

Bassan’s father is stepping down from command. His best friend almost dies when Bassan freezes. Now, he’s being sent across the galaxy to speak at an important conference. Despite saving the eleven races years ago, he’s paralyzed by doubt. Could things get any worse?

Once there, new acquaintance Zendar convinces Bassan to visit his planet for a humanitarian mission. Bassan’s special connection to ancient technology is the key to saving Zendar’s people. One problem though—it’s a prisoner planet.

On Ugar, he discovers things aren’t so straightforward. As each truth reveals itself, the situation grows more desperate. If he can’t find the right answers, he might die along with Zendar’s people. Can Bassan summon the courage to be a hero again?

“Cavanaugh returns to the world of his Cassa Series…for a fourth inventive space opera.” – Publisher’s Weekly

Praise for his other Cassa books:
“…calls to mind the youthful focus of Robert Heinlein’s early military sf, as well as the excitement of space opera epitomized by the many Star Wars novels. Fast-paced military action and a youthful protagonist make this a good choice for both young adult and adult fans of space wars.” - Library Journal

Alex J. Cavanaugh works in web design and graphics. A fan of all things science fiction, his interests range from books and movies to music and games. Online he is known as Ninja Captain Alex and is the founder of the Insecure Writer’s Support Group. His Cassa books are Amazon Best Sellers and winners of the Pinnacle Book Achievement Award. Website / Insecure Writer’s Support Group 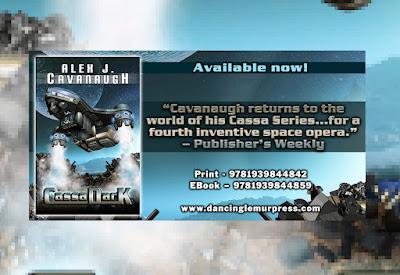 Another of our authors had a release last month from The Wild Rose Press: 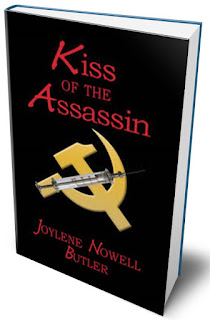 Marina Antonovna, a Soviet spy, and Mateo Arcusa, an American homicide lieutenant first meet in Cambodia during the Vietnam War as enemies. Fearful that the most powerful man in the Soviet Union, KGB Chairman Vladimir Kurenkov, has ordered her death, Marina risks everything to defect to the United States.

She promises Mateo that her days as an assassin are over. Vladimir is determined to do whatever it takes to bring her back and, by threatening Mateo’s life, forces Marina to break her promise.

Joylene Butler lives with her husband in the tiny village of Cluculz Lake in central B.C... She is the author of three suspense novels and a contributor to one anthology.

What’s your take on audio books?

And order CassaDark today through any of the links or through Dancing Lemur Press direct. (Extra bookmarks and swag included with print orders!)