Is Urban Fantasy the New “It” Genre? 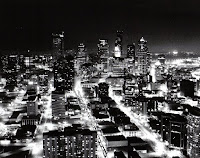 Today I'd like to welcome my buddy CC from CC Chronicles with her take on urban fantasy!

Is Urban Fantasy the New “It” Genre?

What exactly is Urban Fantasy? That is the question of the day, because the lines have become blurred and so many authors want to jump on this new gravy train. Urban fantasy is becoming one of the most popular genres and that is partly because of those fuzzy lines. Before we look at why it’s growing in popularity, let’s get back to the original question – What is Urban Fantasy?

Technically, Urban Fantasy is a fantasy set in a city. Sounds pretty vague. The original Urban fantasy plots were borrowed from Noir. They usually revolve around solving a mystery and often have an element of horror or paranormal. Like thrillers, they have many twists and turns. The main characters are usually tough as nails and the story is often told in the first person narrative. Well, that sounds pretty defined and straight forward. So why the blurred lines. Because authors and publishers want to sell the most books possible and because Urban Fantasy can encompass so many different types of stories they buyer demographic is broadened. For example, as popular as the romance genre is (and it is currently the best selling) many authors don not want to be labeled as romance writers or even paranormal romance writers. Paranormal Romance is one of the genres most often miss labeled as Urban Fantasy because it can have all the elements of an Urban fantasy, however, the plots is driven by the romance not the action or fantasy elements. Romance has generally attracted the female buyer (when was the last time you saw a man browsing that section?) and smudging the line and labeling a paranormal romance, Urban Fantasy, an author can capture more male readers. By the same token, contemporary fantasy, even horror, generally draw a larger male audience than female. Both men and women like reading about strong female leading characters and many Urban fantasy’s have these femme fatales.

Is this why Urban Fantasy is growing in popularity? Partly. But the main reason we read Urban fantasy is escapism. We want to get lost in a story about a tough hero. We want to live vicariously and defeat the bad in the world. When life is difficult and we are surrounded by despair we want the strength that our hero possesses. In our current economic crisis, we want the thrill of not having to worry about money, because rarely does the hero in fantasy have to despair over finances. Finally, often these heroes have super human strength or immortality. By losing ourselves in Urban Fantasy, we get to experience a magical life that has just enough realism to keep us connected.