The Desert and the City, by Derek Bickerton
Strategic Publishing, 2009

It is late in the 4th century AD and Zachary, a young Greek from Alexandria, has decided to become a hermit. Spurned in love, Zachary ventures to the fringe of the desert to join a colony of Christians to live a life of pious reflection. There,, Zachary learns from a fascinating mix of individuals who help him take his first steps on the road to spiritual perfection. But an untimely return to Alexandria to join in an attack on a pagan temple pulls him off course, and he falls victim to anger, drunkenness and lechery. Agonized with remorse for his sins, Zachary sets out alone into the deepest desert to wager his very life against his hope of salvation.


Zachary’s head, bowed by the weight on his back, forced down his gaze to the few feet of ground immediately in front of him, so he saw nothing of what was happening until he heard Benjamin’s cry. John, wrapped in meditation, saw nothing either, and as for Anoub, who knew what, if anything, went on in Anoub’s mind? It was the former pagan priest, curious as always about his surroundings, who first saw the tall dark figure on top of the wall of the escarpment, away to their right, gesticulating wildly, outlined against the sky.

“Look at that, Father!” Benjamin cried out.

“Who is it?” John squinted myopically into the light.

“Cosmas the Syrian, he lives just under there.”

And indeed Cosmas, if it was he, seemed to be locked in struggle with some invisible enemy. Now his hands struck out wildly at vacancy, and now his body contorted, as if he were fighting with a ghost.

“Is it charitable to watch him, do you suppose?” Benjamin asked.

“No,” John said. “It’s his own battle. On the other hand, he may need help. We should go to him without looking at him, for that might be embarrassing to the brother.”

“How will we get up there?” Benjamin asked. “There’s no path.”

“If he got up there, we can. Put down your loads, my children. Zachary, stay right there and look after the loads and the donkey.”

And the other three hermits set down their loads and headed for the escarpment, heads bowed so as not to witness what, if it were indeed a battle with demons, the brother might conceivably lose. But Zachary watched. He tried not to, he really tried. He forced his gaze away from the escarpment, out into the blistering glare of the nitrate flats. He shut his eyes and recited the Jesus prayer and the prayer of the publican and any other prayers that came to mind, while the donkey tried patiently but rather hopelessly to graze some spiny, thistle-¬like plant that grew there. Nothing worked. Something, perhaps some premonition of evil, continually drew his eyes back to the gaunt black-clad figure on the escarpment and the three hermits steadily approaching the foot of the cliffs. The figure was no longer struggling--it was erect now, its arms stretched out ... in supplication?

For a fraction of a second Zachary believed that Cosmas the Syrian actually was flying. His body, like a projectile, was hurled outwards and upwards, arms outstretched, legs spread wide like the forked tail of some improbable bird. The sky could be seen briefly between his feet and the ground. For what seemed an interminable moment he hung there, his tunic ballooning in the breeze, his hands beginning a loose flapping gesture. Did Zachary really see, or only imagine in retrospect, the look of shocked disbelief that replaced the serene confidence of his expression? Whether or not, before the second was over, Cosmas was falling.

His scream blended with Zachary’s futile shout of warning. The three hermits began to run. Zachary, oblivious of John’s instructions, started to run too. Only the donkey continued as before, quietly seeking some more tender part of the thistles. Cosmas fell, screaming, his limbs flailing, turning over and over until there came a dull, heavy, shapeless sound, a sound such as a sack of grain dropped from a height onto a granary floor might make. After it came a silence almost tangible, a silence that seemed the reverberant echo of that unhuman sound. For a second, everything was frozen in a static tableau: the three hermits partway up the talus slope, Zachary approaching it, and the black figure sprawled shapelessly higher up, near the foot of the escarpment. Then the three hermits scrambled on up, dust and loose stones cascading from their flying feet, with Zachary following.

Benjamin reached the figure first. He bent over it. “He’s still alive,” he said.

John gained his side and crouched down. “Don’t be afraid, my son ... Friends in Christ are with you.”

Blood was flowing from the man’s mouth. His arms and legs were at angles that no limbs should be capable of. Blood oozed in rusty stains over his black tunic. Yet his eyes were open, with a terrible restlessness, as of a man plagued with evil visions, and the bleeding mouth, missing most of its teeth, opened and closed its dark cavern, struggling to speak.

“Let him talk,” John said. “He needs to talk. Pray for his soul, but if he talks, stop and listen.”

“Can’t we give him absolution?” Zachary asked, catching up with them.

“Of course not. None of us is ordained, it wouldn’t be valid. But we can pray for his soul.” 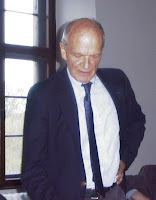 Derek Bickerton is Professor Emeritus of Linguistics at the University of Hawaii. He is author of Language and Species, Bastard Tongues and several other widely-praised books on language, as well as four novels. He lives on the North Shore of Oahu. Volumes 2 and 3 of The Commandment Trilogy are forthcoming.

Purchase the book at Strategic Book Group
at Thursday, January 21, 2010