"It's just gone 8 o'clock and time for the penguin on top of your television set to explode."

What to do when you have too many books! Good Golly Miss Holly

Great YA site! YA Highway

Send a book or Ebook to the troops! Sharing with Writers

Meet Molly the horse - an amazing Katrina survivor and inspiration! Snopes
Courtesy of Bibliophiles by the Sea

Remember to check out the contest - Mystery Man Contest

* I just found out that Teens Read Too has given Book V a FIVE STAR review, claiming it's the best of the series!!! Woo-hoo!! 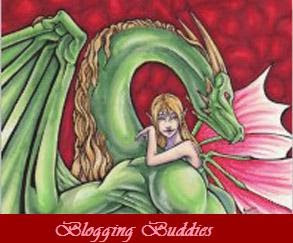 And I received a wonderful award from CC Chronicles!!!
I feel so honored.
All I did was prod her to begin - CC did all the work.
Thank you so much, CC!
You one awesome chick.


"This one is The Blogger Buddies Award and it's for those blogging buddies I have who have helped me make this blog what it is."

I have several people who really helped me get this blog going.

Marvin Wilson at   The Old Silly- I know I pestered him to death via emails!!
Helen Ginger at Straight From Hel
Dani at   -Book Blog Tours I am so glad I took her class last January!

And thanks to everyone who comments - that's what continues to shape this blog.

Wow - I didn't see any new movies or purchase any new CD's! I do have an ITunes gift card burning a hole in my pocket, so new music is in my very near future. Next movie on my list is The Wolfman next month. Nixon/Frost arrived from NetFlix, so will watch that by Saturday.

Otherwise, the show of choice in our house is American Idol. My husband started watching several years ago because he enjoyed the train wreck of really bad auditions. Well, he got hooked, so now he watches every year. I catch some of it. I don't like watching the idiots, but some of the stories are so moving. And is it just me, or is Simon just a little less mean this year? Anyone else an Idol addict?

For my newer watchers who've never seen Steve's Bad Day - this is my husband's short computer animation movie. And yes, I am two of the voices! Enjoy - it's funny! (And for those who wonder - it took him about eight months to do this piece.)