And now for the news around the book world...

Book Giveaways!
“How to Rule the World From Your Couch” book giveaway - At Home With Books
Many cool giveaways, and more than books! J. Kaye’s Book Blog

Another type of festival, the Encyclo-Media, courtesy of Vivian Brain Cells & Bubble Wrap

Josh Hanagarne poses the question – is commenting on other blogs worth it? Pro Blogger

And Jay Leno's new show has a segment where guests race around a track and their times are ranked - this idea was STOLEN from BBC's Top Gear program!!!!!


Spunky is currently in Oregon, so my time online will be limited.

I think I really need this break, especially as I will hit the ground running upon my return and be on the road more than I am at home.

I also need this time to reflect and re-evaluate. Because I'm beginning to think I am on the wrong path...


Whether it's the subject matter of my books or my marketing, something isn't working. I'll confess, I'm struggling. The non-fiction is doing well. My YA series... not so well. My publisher's sent out huge mailings to libraries & bookstores, sent out PR and ARCs, submitted to bookstores to stock. (B&N carries in warehouse, but declined to stock in stores.) On my end, I've sent out mailings & emails, made appearances, set up virtual tours and done publicity online. But something isn't working...


Did you know that during my 2 & 1/2 week virtual tour for Book III, my website visitor total was at its lowest of the entire year?

Book IV comes out October 6th and the final book on March 16, 2010. My editor had high praise for Book V, and it may indeed be one of the best things I've ever written. However, it will also be the last in that series and genre. I don't do nitty-gritty. I don't do controversial. I don't write paranormal or urban fantasy. And that's what sells. So I guess my chances at success as a YA author are pretty much... nil.

I've got a couple things in the works, one of which is a follow-up to "Overcoming Obstacles with SPUNK!" for children. After that, I have no idea...

Guess I'm at the crossroads on a path I should've never pursued...

* And lest you think I am in a big funk, I'd like to thank Terry Lynn Johnson for her kinds words the other day. I won't give up, Terry, and I'll try to keep inspiring! Thanks so much.

I forgot to mention that as members of the Trans Siberian Orchestra fan club, we get first dibs on concert tickets. For their show in Raleigh this December, we are on the floor, in the middle, SECOND ROW... 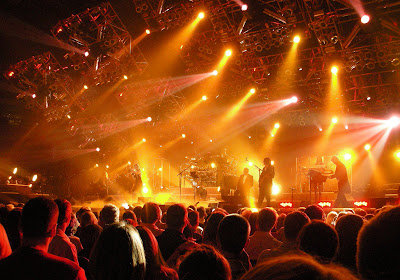