This week, the Christian Fiction Blog Alliance is introducing
The Falcon And The Sparrow (Barbour Publishing, Inc - August 1, 2008)
by M. L. Tyndall
ABOUT THE AUTHOR:
M. L. (MARYLU) TYNDALL grew up on the beaches of South Florida loving the sea and the warm tropics. But despite the beauty around her, she always felt an ache in her soul--a longing for something more.
After college, she married and moved to California where she had two children and settled into a job at a local computer company. Although she had done everything the world expected, she was still miserable. She hated her job and her marriage was falling apart.
Still searching for purpose, adventure and true love, she spent her late twenties and early thirties doing all the things the world told her would make her happy, and after years, her children suffered, her second marriage suffered, and she was still miserable.
One day, she picked up her old Bible, dusted it off, and began to read. Somewhere in the middle, God opened her hardened heart to see that He was real, that He still loved her, and that He had a purpose for her life, if she'd only give her heart to Him completely.
Her current releases in the Legacy of The Kings Pirates series include:The Restitution, The Reliance, and The Redemption
ABOUT THE BOOK:
When Mademoiselle Dominique Dawson sets foot on the soil of her beloved homeland, England, she feels neither the happiness nor the excitement she expected upon her return to the place of her birth. Alone for the first time in her life, without family, without friends, without protection, she now faces a far more frightening prospect, for she has come to the country she loves as an enemy-a spy for Napoleon.
Forced to betray England or never see her only brother alive again, Dominique has accepted a position as governess to the son of Admiral Chase Randal, a harsh man, still bitter over the loss of his wife. Will Dominique find the strength she needs through God to follow through with the plan to rescue her brother? Will Chase find comfort for his bitter heart in God's arms and be able to love again?
And what new deceptions will they both find in France when they arrive to carry out their plan?
If you would like to read an excerpt of The Falcon And The Sparrow, go HERE
The book link is: http://www.amazon.com/exec/obidos/ASIN/1602600120 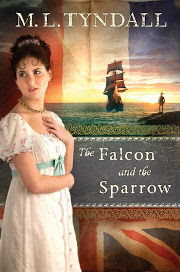