JL Campbell and Why You Will Love the Hero 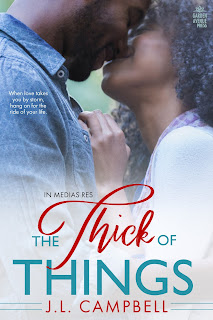 Please welcome JL Campbell as she discusses the hero in her latest book, The Thick of Things.

For mature people, a lapse in decorum means it’s time to take stock. Douglas has an out-of-character experience, however, he’s not someone to wallow in his mistakes. Instead, he convinces Khalila that she needs to take a chill pill, face reality and get past their initial foul-up.

Despite Khalila's reluctance to interface with him, Douglas salvages the situation with style and grace. So why should readers love this hero? Here’s my two cents worth:

He’s a nurturer: He puts up with Khalila’s foolishness and doesn’t drag her off to his cave by the hair to drum some sense into her head. Instead, he’s kind and patient, wearing down her defenses and getting her to see beyond their blunder.

He’s long-suffering: Khalila would try the patience of Job with her inability to get past her mistakes and move out of the rut she’s stuck in. Douglas is a breath of fresh air, who shakes things up and reminds her she’s very much alive and has needs like any other healthy forty-two-year old woman.

He’s a fire-starter: From a single encounter, Douglas revs Khalila’s sexual engine but also wants her to understand that their relationship goes beyond the physical. Having lit her fire, so to speak, he has a hard time keeping Khalila at bay, but Douglas has uncommon restraint which drives Khalila nuts.

Few men would go out of their way to track down a woman of questionable character. Douglas shows himself to be a unique individual, who not only does exactly that, but makes Khalila want more of what he has to offer, although she does get in her own way half the time. 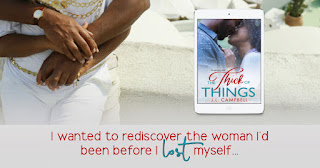 Life has a way of going awry when you least expect it, and Khalila Skyers learns this lesson the hard way. In one devastating blow after another, she loses her cosy existence. Then Douglas Blythe overtakes her life like a flood, and she’s not equipped to deal with an attraction that seems forbidden and overwhelming. But her body and heart want what they want, and leave her wondering if she ever knew herself at all.
Douglas is determined to help Khalila move beyond her obsession with the past and reach for love a second time. No matter how long it takes. No matter the distance. He’s going to prove he’s worth the risk.