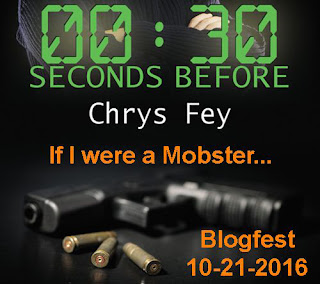 I’m participating in Chrys Fey’s If I Were a Mobster Blogfest. This is in celebration of her latest release, 30 Seconds Before: Prequel to 30 Seconds.

She offered a mobster profile to fill out and I decided to go back to my German roots, plus the time I lived in New Mexico.


My Mobster Name: Delmi Wittmeyer (That is my real maiden name. The Wittmeyers were kicked out of Germany in the 19th century. I’ve never heard why, but I can pretend we were involved in illegal dealings.)

Crime Zone: Alamogordo, NM (That city has a large population of Germans. Plus I lived in Albuquerque four years before moving to NC.)

My Look/Disguise: I have long dark hair, I’m pale and thin, and possess a beauty to die for. Disguise? No way! I’m flaunting my stuff.

What I’m Known For: Drug and booze trafficking - between the Indians, the Hispanics, and the Caucasian population, I have it made! No one delivers the goods like I do.

My Catch Phrase: “Bitteschon!” (Means “You’re welcome” in German. I say it often and always after killing someone. Those pathetic worm of a human beings should thank me!) 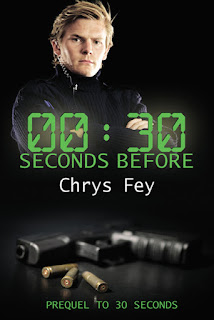 Blake Herro is a cop in the Cleveland Police Force. Ever since he was a child he wanted to do right by the city he loved by cleaning up the streets and protecting its citizens. Red, a notorious mobster, has other plans.
On a bitter December night, ten police officers are drawn into a trap and killed by Red’s followers. Blake wants to bring down the Mob to avenge his fallen brothers and to prevent other cops from being murdered. Except the only way he can do that is by infiltrating the Mob.
Every minute he’s with these mobsters he’s in danger. Around every corner lies the threat of coming face to face with a gun. Will he make it out of the Mob alive or will he be their next victim?

To celebrate, 30 Seconds, the follow up story, is on sale for 99 cents!

BIO:
Chrys Fey is the author of the Disaster Crimes Series (Hurricane Crimes and Seismic Crimes), as well as these releases from The Wild Rose Press: 30 Seconds, Ghost of Death, and Witch of Death. Website / Blog / Facebook / Twitter
at Friday, October 21, 2016

You're going to be a real mobster eh? Now Liz Seckman is going to be a softer version. Way to go Chris Fey, sounds like a great book

Both books look great. I'm wishing her all the best.

I do not want to mess with Delmi Wittmeyer. Or any Wittmeyer for that fact. Kicked out of Germany? That's intriguing, and quite the mystery. One can only speculate as to why. ;)

Thank you so much for participating in my blogfest!!!

Maybe that is why you were kicked out of Germany.

Bitteschon? What a polite mobster! I have to admit, I'd be more tempted to throw in a curse. Sche*&6-kopf is one I remember from German class.

COOLIO! MY FAMILY IS FROM GERMANY AS WELL. MY GREAT-GRANDFATHER FROM MY MATERNAL SIDE CAME TO AMERICA IN 1856.

Congrats Chrys! Love your mobster profile, Diane. Good to go back to your roots!

Chrys, some day I will dig around and find out why.

Shelly, that might be about the time mine came to America, too.

haha could have been kicked out of Germany for it if you have it in your blood to get the booze to all.

Now that booze trafficking is dangerous. You may imbibe in the goods and not have anything to deliver!! Watch out!

You're in a dangerous business, it sounds like. Take care.
It would be interesting to know why your family was kicked out of Germany. I think my mother's family came from Germany. Not sure or when.

You're the kind of mobster I want on my side!

"always after killing someone..." Ha! And this mobster comes with a ready-made 'family' ;-)

Fun blogfest. Good to know you have a mob persona all ready. You never know when it'll come in handy. Congrats to Chrys!

Delmi doesn't joke. Talk about an efficient and deadly mobster. She can be on the cover of Cosmo and put you six feet under! Versatility folks.

lol, love your mobster self. I have Scottish roots and way back in the day two brothers were kicked out of their clan. We remember they were kicked out, but not the reasons. It's funny that.
Congrats to Chrys!

Love that you really got into it.

Damn, Your one mean mobster lady. You kick some butt. Love your profile. Congrats to Chrys on her book. The excerpt is full of suspense. I researched what it's like to infiltrate the mob today it's quite frightening. I'm eager to read her book.

I would have said "gesundheit" had you not told us what Bitteschon means!
Congrats to Chrys on the new release.

Dankeshon. I'm of German descent myself; I'd be your minion :) I'm a Wielputz, by the way.

Love the Porsche. I have to keep mine simple so as not to attract unwanted attention. As for business, mi famiglia doesn't deal with narcs. We have our hands in just about every other pot. :) I like that you went back to your German roots. Great profile. Have a great weekend and enjoy the rest of the hop. Hugs. Eva

Hi Diane - love the take on your German roots ... I wonder why they were kicked out - or just simply longing to escape elsewhere - but the mobster prevails. The escape hasn't changed your profile, or the genes have returned?!

Congratulations to Chrys on her book ... and to you both - cheers Hilary

Lynda, we both need to do some research.

Dolorah, you have a deal.

I love your persona, Delmi!

Wishing Chrys much success with her new release!

I like the German twist on everything!
Great job!
Heather

I got a kick out of your pretending game. If we don't lost that skill, we have a writing career ahead of us!

Wantta race? I think my Camaro is pretty hot, but your Porsche??? I love sports cars!
sherry @ fundinmental

Congratulations to Chrys on the new release. Interesting monster.