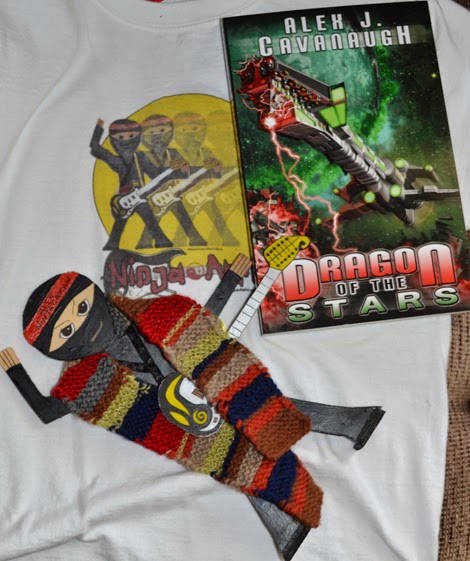 April 7 2015 SCAVENGER HUNT! Comment to win an autographed copy of Dragon of the Stars, tons of bookmarks & postcards, and a $20.00 iTunes gift card–where is Mini-Alex? Visit Alex for a list of the participants. (Open through April 11 – winner announced April 13 at Alex’s blog.) 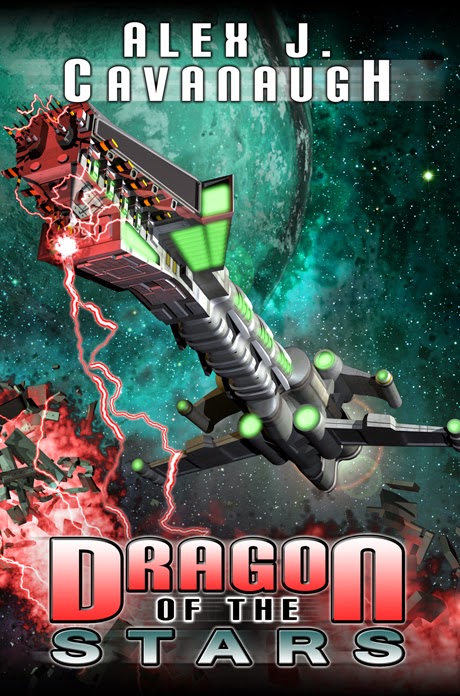 The ship of legends…

The future is set for Lt. Commander Aden Pendar, son of a Hyrathian Duke. Poised to secure his own command and marriage to the queen’s daughter, he’ll stop at nothing to achieve his goals.

But when the Alliance denies Hyrath’s claim on the planet of Kavil and declares war on their world, Aden finds his plans in disarray. Entrenched in battle and told he won’t make captain, Aden’s world begins to collapse. How will he salvage his career and future during Hyrath’s darkest hour?

One chance remains–the Dragon. Lost many years prior, the legendary ship’s unique weapon is Hyrath’s only hope. Can Aden find the Dragon, save his people, and prove he’s capable of commanding his own ship?

Alex J. Cavanaugh has a Bachelor of Fine Arts degree and works in web design, graphics, and technical editing. A fan of all things science fiction, his interests range from books and movies to music and games. Online he is the Ninja Captain and founder of the Insecure Writer’s Support Group. He’s the author of Amazon Best-Sellers CassaStar, CassaFire, and CassaStorm.
Alex J. Cavanaugh / The Insecure Writer’s Support Group / Twitter

Those of you stopping by for the A to Z Challenge, I am one of Susan Gourley’s Dragon Soldiers and my introductory post for April can be found HERE.

Excellent post on what I'm sure is another best seller.
Good luck to Alex and thanks for a wonderful review of the book.

Alex is an amazing author. I'm sure this is going to be another great one!

I surfed your blog a bit and you have a lot of interesting articles and advice. I'm glad you participated and I found you. Have a great day. Eva

I forgot to mention that I think Mini-Alex is laid out on a sofa getting ready to crack open his new book. Congrats, Alex!

Great post, Mini Alex is got his T-shirt on from a design, from me... YEAH!

There's no earthly way of knowing.
Which direction we are going!

HOLLYWOOD NUTS!
Come Visit: You know you want to know if me or Hollywood... is Nuts?

If Mini Alex is keeping up with Alex, he's got to be exhausted!

Excited for the release!

I think both mini-Alex and Alex will need a vacation very very soon. Congrats to both of them.

Arlee Bird
A to Z Challenge Co-host
Tossing It Out

M-A is on t-shirt on a couch. With all this running around, perhaps he's going to change into something cooler and drier. He's got to be sweaty for sure!

I'll have to click on over. A scavenger hunt sounds like just the thing to organize my blog visits today.

This one is wonderfully meta! It looks like Mini-Alex is jammin on a T-shirt of him jammin'. I LOVE it.

Yay for Dragon of the Stars release day!

I expect to see Alex everywhere the next few days or maybe the rest of the month.

Looks like Mini-Alex is product testing and approving Ninja apparel.

Mini-Alex has fallen over (I can't say fainted!) with surprise at being shown the new T-shirt designed in his honor.

Looks like Alex is sleeping on the couch, chillaxin'!

Many congratulations on Alex's new book. It was a great read. :)

It looks like Mini-Alex is laying in bed, perhaps waiting to have a cup of cocoa with Mrs. Mini-Alex?? :)

I wonder where that mini Alex is? hmm. Saw him surrounded by onions. Maaaybe he's in a field lying down. Yeah, that's a stretch. :)

Can't wait to read his book.

He is certainly lying down on the job this time. All these promotions have worn him out.

Good luck to Alex! I downloaded my copy this morning.

I'm guessing that Mini is on Alex's couch in that photo.

So stoked for Alex. Mini-Alex is showing off his favourite t-shirt and book.

Yay for Alex! I have a copy of his book.

looks like he is lounging on a chair cushion - contemplating a tour, t-shirts ready to go..rock on

Mini Alex must be flying a T-shirt ship on his own at a crucial moment to rescue his ninja captain from the horrors of book release day. May the force be with you all!

Mini Alex is about to put on his best t-shirt and go practice some ninjutsu, jujitsu and clonjatsu.

Showing off his awesome shirt collection- isn't that one of Jeremy's?

Sounds like an awesome book! Wishing all the best for Alex!

Hi Diane - I think mini Alex is exhausted and sleeping on a quilt before rushing off to find writer Alex somewhere in the blogosphere ..

Mini-Alex is showing off his cool new shirt! He needs one his size, too.

I think that shirt might be a few sizes to big for Mini-Alex, but I bet he likes the repetitive image of himself!
Gonna check out some of your spunk now, Diane!
Brandy from Brandy's Bustlings

Congrats to Alex! Best wishes for a huge success!

I have to figure out what's going on with this scavenger hunt. Things are so crazy with A to Z, I'm feeling like I'm in this big ocean, swimming my butt off to stay afloat!

So excited for Alex! Is Mini Alex in the laundry or at a tshirt shop? So fun! :)
~Jess

I love seeing Mini-Alex all around. I'm sure this will be another hit for Alex.

So good of you to bring further awareness of our friend Alex's latest book endeavour.

A lovely weekend to you and yours. Thanks for your kindness.

Making an "imprint" on the next line of T-shirts for the Mini-Alex fan club. When can I buy mine?

Mini Alex is chilling out, its been a long book tour but time is finally near.

Alex's new book sounds great! He's going to have a busy month ahead of him!

The Mini Alex hunt was fun! It created a totally satisfying sci fi buzz. I decided to buy Dragon of the Stars which I'll be reading after the AtoZ challenge.