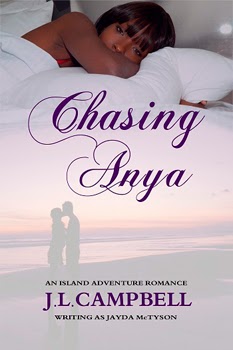 Been there. Done that.

Feisty and independent, Anya Davies lives by her own rules. The one thing she’s hell-bent on avoiding is a conventional relationship. Nor is she interested in romance, thanks to her abusive ex who refuses to stay in the past. The second complication in her life is a secret that condemns her to constant guilt and a solitary life. A series of near misses and escalating threats are a third and worrying factor. Only a special man would understand or live with Anya’s challenges and demands.

Casual sex...so not having that.

Enter Christophe Mondesir. Two years ago, Anya dumped him without explanation. An accidental meeting shoots Anya back on Christophe’s radar. He refuses to be denied and plans to breach the fortress Anya has built around her heart—if she’ll commit to more than a casual liaison. He’s also determined to find out what she’s hiding. That’s if the stalker who’s after Anya doesn’t end her life first.

J.L. Campbell is a proud Jamaican, who is always on the hunt for story-making material.


Hosted by Stephen Tremp, Alex J. Cavanaugh, and myself.

This blogfest, also known as “Wormfest,” runs March 10-16, 2014, and is a celebration of Stephen’s upcoming release, Escalation.

Name one thing where science advances mankind, and one where technology will go too far and set us back. They can be the same thing or different.

Example: De-extinction or bringing back extinction species through backbreeding, genetic engineering, and cloning. (Article here.) With all the breakthrough discoveries mankind is on the cusp of, are we playing God?