I'm delighted to present to you fellow born Oregonian and friend, Hart Johnson!

Promotion and the Awkward Girl

First, I want to shout out a HUGE Thank You to Diane for having me today as part of my Begonia Bribe Book Tour!

All of you who are regulars around here know Diane is FULL of fabulous promotion advice. And I ALWAYS know it is smart advice. But see... I'm awkward... and a lot of it sounds... you know... like I'd have to GET OUT THERE... TALK to people... TERRIFYING STUFF!

And I'm not at ALL going to suggest we don't push ourselves out of our comfort zones. Introverts just don't have as much of a chance of getting read unless you do something to balance those quiet tendencies.


FIRST: Persistence is your friend. I am a cancer (astrologically speaking) and heard the analogy that we are the sea—we reshape continents once wave at a time. So if the HUGE PUBLIC SPLASH is too much to think about, PLAN FOR a long slow burn... build your network over time with baby steps... make your relationships one on one and build them, just being your own quiet self.

I know... those of you who know me are thinking sarcastically... yeah... some shrinking violet, that one... but that leads to my SECOND POINT: Pretend you're a wild naked chick! Okay, maybe not literally. That one might be taken. But online we can try on personalities that we aren't brave enough to wear in real life.

Though I confess you might be in for some blushing when a reader says 'You're the Watery Tart!' at a book event.

THIRD: and this is where I contradict myself... Just a minute ago I said be who you want, and HERE, I am saying BE YOURSELF. But what I mean is let your personality shine through, your humor or your joy or your snark—whatever it is that gives you your voice and your passion. Like what you like with a vengeance.

Now is the HOW TO MIX IT UP thing: Be a GOOD friend and follower. Share a lot of what your buddies are doing. For we wilting wallflowers it is easier to share about our friends' successes than our own. Use your media: Facebook, Blog, Twitter—wherever you go, shout about your buddies.

See, THEN, when it's YOUR TURN your buddies shout about YOU and you don't HAVE TO!!!

I know there's no real substitute for really getting out there, but this feels, to me, like a manageable compromise as I learn the other stuff in baby steps. 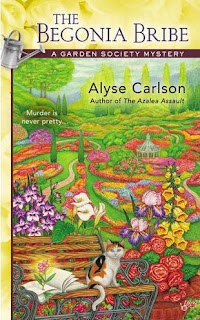 The Begonia Bribe Blurb: Roanoke, Virginia, is home to some of the country’s most exquisite gardens, and it’s Camellia Harris’s job to promote them. But when a pint-sized beauty contest comes to town, someone decides to deliver a final judgment …

A beauty pageant for little girls—the Little Miss Begonia Pageant—has decided to hold their event in a Roanoke park. Camellia is called in to help deal with the botanical details, the cute contestants, and their catty mothers. She soon realizes that the drama onstage is nothing compared to the judges row. There’s jealousy, betrayal, and a love triangle involving local newsman—and known lothario—Telly Stevens. And a mysterious saboteur is trying to stop the pageant from happening at all.

But the drama turns deadly when Stevens is found dead, poisoned by some sort of plant. With a full flowerbed of potential suspects, Cam needs to dig through the evidence to uproot a killer with a deadly green thumb.

Hart (aka, Alyse Carlson) writes books from her bathtub and can be found at Confessions of a Watery Tart, on Facebook (author page, profile), Twitter, or Goodreads.
Book links: Amazon, Barnes and Noble

Jewel of Shaylar
By Laura Eno

Archaeologist David Alexander investigates the cave where his father disappeared and hurtles into another world, one filled with magic and bizarre creatures. The mad ravings in his father's journals of icemen and dragons may not be fantasies after all.
Convinced his father may still be alive, David begins a treacherous journey to find him and discover a way home. Along the way, he encounters a few unlikely friends. A Dreean warrior, a beautiful thief and a satyr join him as he searches.
David's arrival into this new world sets off an explosive chain reaction of events. Faced with powerful adversaries and few clues, he may not get the chance to rescue his father before disaster strikes, condemning both of them to death. Or worse.

Purchase Jewel of Shaylar at Kindle US, Kindle UK, Barnes & Noble, Smashwords, Kobo, and in paperback on Amazon US.