The Multi-Genre Author with Susan Whitfield

Now that I’m a multi-genre author, I thought I’d explain how I became one. When I started writing seriously back in 2004 I knew I wanted to write a mystery because, after all, that’s what I enjoy reading most. So I wrote Genesis Beach, which began as a short story and turned into a novella because I didn’t have enough room to tell my story. Eventually the book became a novel, by the sheer numbers under consideration by a publisher. In it I introduced Logan Hunter, an intern for the SBI, (NC’s equivalent to the FBI).

When I fell into that dark area called “writer’s block”, I whipped out fresh clean paper and started writing another book about Logan Hunter, set in another area of North Carolina. This time she was a full-fledged SBI agent and I challenged us both by having her track down a serial killer in western North Carolina. Just North of Luck remains my most graphically violent novel. 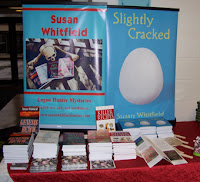 I added Hell Swamp and Sin Creek to the mix, giving Logan plenty of heinous crimes to investigate. Along the way I added some awkward romance and showcased different parts of North Carolina in each book. Now that I’m writing the fifth book in the series, I’ve aged her and certainly she has matured into an experienced agent not to be underestimated.

But after the fourth mystery, I wanted a diversion, so I wrote a women’s fiction, Slightly Cracked, the plot of which I’d be carrying around in my head for some time. It’s about life-long friendship with plenty of hilarious antics to be sure.

I also authored a unique cookbook featuring recipes from mystery writers across the country who graciously shared family recipes with me in exchange for promotion under each one.

So now I’m “multi-genre”. It just happened. I don’t have the space here to expound on my journey, but I can truthfully say that I’ve enjoyed the ride. I hope to write another women’s fiction soon and I’m already doing research for an historical mystery. Maybe I bore easily but I suspect that there’s more to it than that. I’m having the time of my life learning new writings skills and techniques and experimenting with new characters and even new genres.

It’s kind of what makes me tick. Is multi-genre for everyone? Probably not, but I’m enjoying myself and discovering that I can not only make readers squirm with discomfort but also make them giggle. Now that’s priceless!