"We've got your dung."
"What dung?"
"Your dung. Three hundredweight of heavy droppings. Where do you want it?"
"I didn't order any dung."
"Yes you did, sir. You ordered it through the Book of the Month Club."
"Book of the Month Club?"
"That's right, sir. You get 'Gone with the Wind', 'Les Miserables' by Victor Hugo, 'The French Lieutenant's Woman' and with every third book you get dung."
"I didn't know that when I signed the form."
"Well, no, no. It wasn't on the form - they found it wasn't good for business."

Larado, Texas becomes the largest city in America without a bookstore - CNN

Amanda tells us what she’s learned from writing - that doesn’t have anything to do with writing! YA Highway

Purpose of a paperback, according to one librarian, is to tear out the pages to share. Really! You gotta read it to believe it… Write About Now

Helen Ginger’s guest, Kendra Bonnett, gives tips on how to prevent drowning in anonymity at Straight From Hel

Just announced! The top 100 blogs for writers - Universities and Colleges

Have all those Internet terms got you confused? Go to THE online dictionary - NetLingo

And in case you missed it, I was a guest at Michele's  Southern City Mysteries giving tips on book tours.

Crystal at Crystal Clear Proofing was so nice to give me the "Blogger Purrfection Award!"

Yes, I am indeed a cat person. Or is that purrson?
I am passing this on to The Book Kitten because she is just about a cat purrfection as one cat get!

In case you missed it Monday morning... Avatar passed Titanic to become the highest grossing film of all time. As of yesterday, the total sits at $1,849,317,325.00. Considering how much it jumped last weekend, expect Avatar to cross $2 billion this weekend.

Frost/Nixon
This was a NetFlix rental and one I've wanted to see for quite some time.
Now, I have to be in just the right mood to watch a drama. I almost never see them in the theatre. But Frost/Nixon intrigued me from the very beginning. The two leads are quite good. Michael Sheen as David Frost had such a naive but eager aura about him. Of course, I kept staring at him thinking "That's Lucian from Underworld - and he looks so different!" Don't let his former werewolf role fool you - Michael can act!
Frank Langella as Nixon was pure genius. Wow, he really looked and sounded the part! I can see why he was nominated for an Oscar for this role. Watching him toy with Frost was like a cat playing with a mouse - until the end, when Nixon finally provided Frost with the incentive he needed to discover the truth...
I was too young to remember Watergate and this movie did not change my opinion of Nixon. He knew he was doing the wrong thing but did it with the best of intentions. (And unlike most of our presidents, he just happened to get caught!)
My rating - A

If you are not following CC Chronicles, let me tell you a little something about this woman! She is one of the most considerate, generous individuals I have ever met. You make friends with CC, you have a friend for life!

She'd surprised me with a gift box a few months ago, filled with Avon body wash, spray, lotion, lip balms, and delicious Mellowcreme Pumpkins. (Those didn't come from Avon!)

Well, I asked her last week if I could buy some of the body wash from her, as I'd just run out. So what does she do?

She send me ANOTHER box of goodies, including a new scent!!!

CC, you are awesome! I need to make a road trip and take you out to dinner!! (And I can do that, too!) 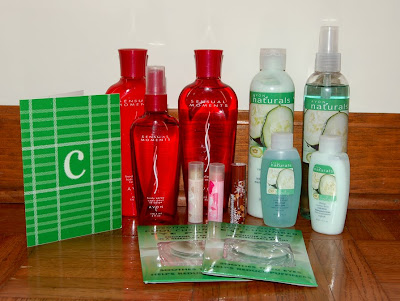