The Thursday Excerpt - Rowan of the Wood

Rowan of the Wood won the Indie Excellence Award for YA Fiction and that the sequel WITCH ON THE WATER is coming out in October. We're asking people to help SEND WITCH TO THE TOP. Details here Witch on the Water

Rowan of the Wood

by Christine and Ethan Rose

After a millennium of imprisonment in his magic wand, an ancient wizard possesses the young boy who released him. When danger is nigh, he emerges from the frightened child to set things right. Both he and the boy try to grasp what has happened to them only to discover a deeper problem. Somehow the wizard’s bride from the ancient past has survived and become something evil.

Let me start with a brief set up for this section. This is one of my personal favorite parts of the book. This is after Fiana has been alive for 700 years. She’s done what was necessary to survive and remain heathy so that she could continue searching for her beloved husband who, during all this time, was still trapped in his magic wand. This is the turning point of her life.

She wanted to welcome death, to revel in the pain of being burned alive; but after enduring centuries of pain and hardship, it was an indestructible instinct to survive. She had excelled at survival for so very long. She did not know how to give up and die. Perhaps she would learn at nightfall, but not if she could help it. She was strong. She was a survivor.

The sun began to set, causing the power within her to surge like the swelling sea before the wave breaks. Even though she couldn’t see daylight through the cold stone walls, she could feel it. She automatically pulled against her restraints, but the silver burned her flesh with a sizzle. She stopped struggling. Okay, maybe she was a quicker study than she thought.

A group of dismal men dressed in black opened the heavy wooden door. They held wooden crucifixes out before them. The little one on the right read from the Bible, continuously mumbling in Latin. The one on the left held a wooden stake and mallet. Just in case, she guessed. She hissed at them, for they expected her to do something like that. Mustn’t disappoint.

“Back evil temptress!” the leader cried, thrusting out his crucifix.

“You will be sent back to hell where you belong.” So she wasn’t the only one who could put on a show.

Yeah, yeah, Fiana thought. Let’s get on with it.

The little one kept mumbling his scripture in Latin. The one with the stake tucked it in his rope belt, oddly reminiscent of the monk who had taken the wand. It reminded her that these Christian people had been the cause of everything bad in her life. Fiana sprang to her feet effortlessly. She pulled hard against her chains and screamed, giving voice to the agony and rage deep within her soul. The sound of pure anger erupted from her very core. Her flesh sizzled against the silver. The three men fell back quickly, crossing themselves repeatedly. More guards appeared from outside the door, and they filed in with their weapons drawn. But they quailed before her fierceness, even chained as she was.

“Calm her,” the center priest said to the guards, who cautiously approached.

“You were the one who wanted her alive and kicking for the show, your Eminence. You should have baked her in the sunlight,” one of the guards defiantly pointed out.

The guards pulled out garlic and a stake of their own. Fiana had not been a big fan of garlic when she was human, but now she found it completely unbearable. Her eyes began watering and she started sneezing uncontrollably. She did her best to stand before them with dignity and disdain, impressing on her captors that they were merely an annoying nuisance that she would take care of momentarily. Then she sneezed again.

She offered her chained hands to them. They unlocked the ring from the wall. Her strength and power far exceeded theirs, but she went along like a good little prisoner. If she tried to get away now, she would likely get staked. It would be faster than burning, but she felt confident in her ability to escape the burning. If she did not escape it, that stake would start to look very good. There would be more pain through burning, but that would be good. Pain was life. She had a sudden desire for life—her own and others.

The crowd was chanting as they led her out to the pile of fagots. A single pole as big as a tree trunk stood straight up from its center. Local peasants still worked, marching back and forth, piling more bundles of sticks around it.

Scores of people shouted angrily at her as she passed. The men leading her held out their crosses and read from their Bibles for protection. Her power grew as the night deepened. She had no doubt she could get away, but she would have to kill dozens of people to do so. Now she was faced with the real test. Kill and survive. Be gentle and die. 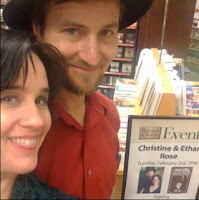 You can find the authors here:
Rowan of the Wood & Book Trailer
Christine Rose
Twitter
at Thursday, September 03, 2009