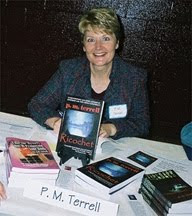 I am honored to present my mentor & dear friend, author p.m.terrell today!
If you EVER have the opportunity to meet Trish in person, DO NOT pass it up! She is just so incredibly genuine and personable. You will come away feeling refreshed, recharged, and blessed to have met such a special person.
So please welcome Trish!
p.m.terrell is the internationally acclaimed author of twelve books, including five non-fiction, two historical suspense/adventure, and five contemporary suspense/thrillers. PBS host Barbara Berlin said Terrell is “the next John Grisham”; Midwest Book Review said, “Songbirds are Free is historical writing at its best”; syndicated Canadian book reviewer Simon Barrett said Terrell’s writing is “a magic carpet ride of writing wizardry”; and Rebecca’s Reads says her books “sing like red-hot jazz.”

Her latest historical suspense, River Passage, is the prequel to Songbirds are Free. It follows the Neely family on the ill-fated Donelson voyage of 1779-1780. The trip was expected to take four weeks but instead took more than four months, as the settlers encountered numerous Indian attacks during the height of the Chickamauga Indian War, as well as disease, starvation, deadly whirlpools and frostbite. Some of the settlers were killed, some were captured… and some lived to tell the tale. 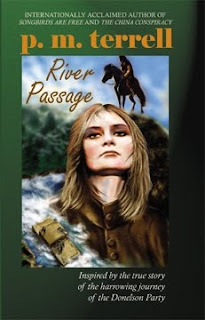 Why did you choose Mary Neely as the subject of River Passage and Songbirds are Free?

My father discovered Mary’s amazing story when he was researching our family history. She had been captured by Shawnee warriors when she was only nineteen years old and held as a slave for three years before she managed to escape. While I was researching her Indian captivity, I located so much information about her life that I had enough to write an entire series about her.

She was captured in 1780. How did you manage to find information from so long ago?

I began with the Internet. I used only information from reputable, dependable web sites—such as those associated with historical societies, museums, and government archives. Songbirds was more of a challenge, because there were month-long gaps in which I didn’t know where she was or what she was doing. But with River Passage, there were several journals kept by people on the river journey, including a detailed one by their leader, John Donelson.

So, were you able to write both books simply through electronic research?

Well, I began with the Internet but through that, I developed a blueprint of places I wanted to visit, people I wanted to talk to, and files and archives I wanted to review in person. So once I had a clearer view of her journeys, I contacted the historical societies, tourism bureaus, and museums along the way and planned several trips.

With River Passage, they began on the Holston River until they reached the Tennessee River. Once they were on the Tennessee, they were repeatedly attacked by Chickamauga Indians from east of Chattanooga (in the vicinity of Duck Town) all the way past Muscle Shoals, Alabama. I went to remote regions where I could view the Tennessee River snaking through the mountains; visited areas in which the Indian villages once were where the attacks were planned (most are under water now since the TVA changed the river so dramatically); and along the way, I met wonderful people who helped me with local information. In Florence, Alabama, I even had a fabulous tour guide who took me to log cabins I would never have found by myself, as well as beautiful regions of the river where centuries earlier, Mary Neely was fighting for her life.

Did you have any harrowing adventures of your own?

Not compared to what Mary experienced, I’m sure—but there were two times that will remain etched in memory! In one location, the road my husband and I were traveling became so narrow and filled with so many hairpin curves that I honestly felt as though I was on the Alpengeist, the twisting, turning roller coaster at Busch Gardens, Virginia! And it was just as steep—if I looked out the side window, I could see drops of hundreds of feet—and no guard rails.

When we went up to the Chilhowee Overlooks, there were times when all I could see out the windshield was sky. The road became so narrow that forest rangers told us if we encountered a vehicle coming the other way, we’d have to back down that winding road! Thank goodness we never encountered anyone else—it was tough enough driving forward; I can’t imagine driving it backward!

But what this did was give me an appreciation for what Mary must have gone through—what we traveled in a matter of hours, it took her months to navigate. And all the Donelson Party had was a crude, hand-drawn map that was not to scale!

So you think all of the ground research was worth the extra effort?

Definitely. In fact, the Nashville Government Metropolitan Archives in Nashville, Tennessee reviewed the manuscript before it went to press, and the Archivist, Ken Feith, determined that I remained so historically accurate that the original manuscript has been entered into the Archives for future researchers and historians! For an author, that is like a slice of immortality.

Did you take photographs or videos?

Yes. I was allowed four pages of photographs in River Passage so I selected a combination of photos and sketches. I also have a web site, Mary Neely, which is devoted to Mary’s Indian captivity and also her river journey. That web site has numerous photographs and also videos of my trips following in her footsteps.

Is the book considered non-fiction?

It falls into two genres: creative non-fiction and historical fiction. Although every event I portrayed in the book is historically accurate, it is written from Mary Neely’s point of view. So I had to become Mary—think her thoughts, have conversations with others—and between the thoughts and the dialogue, it crossed into fiction.

What were some of the challenges Mary encountered?

Apart from the constant Indian attacks, which resulted in some of the members of the party being killed, others wounded, and still others captured—they left in December, thinking the winter months would make for easier traveling along the river. However, it was one of the harshest winters anyone could remember and for weeks at a time, their boats were frozen solid in the water. They had packed enough food for four weeks but their journey took more than four months, so they were literally starving to death. Although they traveled through some regions where game might have been plentiful, they couldn’t stop because of the hostile Indians. They also encountered disease, including small pox, as well as frostbite due to the bitter cold. Then there was the river itself: before the TVA tamed the Tennessee, it was filled with deadly whirlpools and vicious rapids that could easily turn a boat into splinters.

Will you be touring with the release of River Passage?

Yes; my tour begins on September 20 in the Muscle Shoals area of Alabama, and takes me through Tennessee, Kentucky, Virginia and North Carolina. A complete list of appearances—almost all of them include talks with photographs—is located at p.m.terrell

Where can readers purchase River Passage?

It will be available in all fine book stores; if it’s not on the shelf, please ask for it! It’s also available online at amazon.com and other online retailers. And we have a special offer at Mary Neely and p.m.terrell so if you buy the book now you will get free shipping.