What book could be made successfully into a movie now? Discussion open!
And not just any book!
What book contained elements that would require a level of special effects unattainable until now? (Most likely sci-fi or fantasy, or even horror.)
We've all favorites we'd like to see on the big screen. (Praying of course that the writers & director didn't mess it up.) But what book has been out of the reach of film makers due to the implausibility of creating that particular world or reality? What creatures or elements has put your favorite novel on the 'not-in-my-lifetime' list until now? 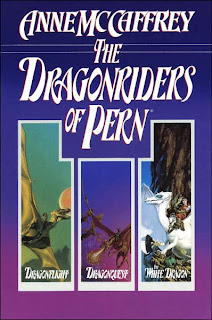 I love Anne McCaffrey's Dragonriders of Pern. I've always thought the trilogy would make for an engaging set of films. However, those dragons (and their little cousins, the firelizards) are pretty integral to the storyline. They are present in almost every scene. Their muscle movements cannot be hidden by scales, as the beasts have soft hides. They fly with riders on their backs. The realism required was beyond our technology.
Until now!
Jurassic Park stirred the possibility many years ago. Now, with movies such as Cloverfield, The Water Horse, District 9 - creatures who are not really there can appear just as real as the actors themselves. It's been many years since these books were best sellers, but who knows? The Dragonriders of Pern could indeed take flight now!
So you tell me! What favorite book of yours has NOT been made into a movie, but with the advances in technology and special effects, COULD be a movie now or within the next year?
at Monday, September 07, 2009