Today I welcome a very talented young writer who goes by MBryn. (Bryn is her middle name.) 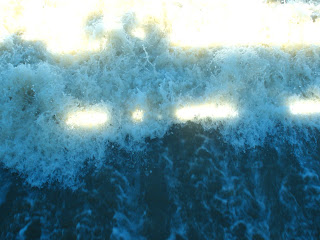 MBryn challenged herself to write a short story (she writes novel-length stories and poems) and asked her friend to suggest a picture for inspiration. This photo was sent to her - We Live in the Tide - and she set to work.

Not only did MBryn complete the piece, it also won first place in the Short Story Category in Victor Valley College's Writing Contest in May!


We Live in the Tide by MBryn

When Mermaids die, their bodies dissolve into sea foam. That’s what they say in The Little Mermaid at least. According to The Last Unicorn sea foam is actually the Unicorns attempting to step on land while fear of the Red Bull drives them away. I’m not sure what other people say about it–aside from the normal scientific explanations, that is.

I’m watching the sea foam run over my bare toes and wonder if I’m touching Unicorns or dead Mermaids or bubbles with an unusually resilient nature. I’m thinking about what you would have told me, and how you’d probably make a joke about the content of whale urine in the ocean. Thinking about how you’d probably tell me that I smelled like whale pee because I’d been splashing in the tide.

In this moment I’m not sure if I miss you or if I’m relieved you’re gone.

I take a seat on a large piece of driftwood and watch the waves crash against the rocks. There are seagulls calling to me, accusing me of hiding bread in my sweatshirt and demanding that I share. I shout at them and kick sand in their direction, but stubbornly they wait for me to surrender some morsel to their care. I pick up a piece of bark from who-knows-where and toss it in their direction, smirking as they squabble over a piece of trash.

I can almost hear you lecturing me about tricking the poor birds that don’t know any better. I mentally argue that they’re probably crapping on my car, so really it’s just a way of leveling the scales. You would argue that two wrongs don’t make a right, and I’d probably tell you that two rights make a left, and we’d stop talking for ten minutes until the argument was forgotten.

I must have sat on that piece of driftwood for hours, until the tide came in and threw more sea foam on my bare toes. I try not to think about Unicorns and Mermaids and whales. I try not to think about your argumentative nature and the way we were toxic to each other. I realize that even if we were wrong for each other, you were still a big part of me.

I stand up and reach into my pocket. Clenched in my fist is a medical bracelet, the kind they give you when you’re checked into the hospital. My name is printed, last name first, in bold capitals, and beneath that is my date of birth in smaller numbers. Also stated are the date that I was admitted and the attending physician.

I stare at the bracelet, trying to discern some meaning from it. I almost wish that it told why I had been in that place, so that when I let this little piece of plastic drift off with the tide, someone will find it and know exactly who I am and what I was. I want them to understand, and this will offer them no understanding.

This bracelet won’t tell them that I was admitted to the psychiatric ward when I was sixteen, or that you lived inside of me like a second person. It won’t tell them of all the sessions with the shrinks, all the medications they adjusted, or the radical treatments the doctors used just to erase the voice in my head. They won’t know that you were the only friend I had growing up, and that the day the doctors took you from me was the worst day of my life.

There is a pen in my pocket and I take it out, flipping the bracelet to its reverse side. I prop it against my palm and write, “I wish they hadn’t cured me” in neat, bold capitals. The pen disappears back into my pocket. I continue to stare at the bracelet in my hand.

The doctors took you away from me, but I never asked them to. I wanted to keep you forever, as my other half and my sometimes savior. You didn’t deserve to be killed, to be turned into something as insubstantial as the foam on the ocean waves. You deserved to live within me, to live as a part of me.

I deserved to keep you.

I close my fist around the bracelet for just a moment, kissing my fingers and muttering something that might be a prayer or might be a curse. Then I fling out my arm and open my hand wide, tossing us both into the ocean to be swallowed up by the tide.

On the drive home, I turn on the radio to fill up the silence that used to be yours.

You can find this piece on her Deviant Art account, along with her other incredible work: We Live in the Tide