This week, the Christian Fiction Blog Alliance is introducing
My Soul To Keep (Multnomah Books - February 5, 2008)
by Melanie Wells
ABOUT THE AUTHOR:
A native of the Texas panhandle and the child of musicians, Melanie Wells attended Southern Methodist University on a music scholarship (she's a fiddle player), and later completed graduate degrees in counseling psychology and Biblical studies at Our Lady of the Lake University and Dallas Theological Seminary.She has taught at the graduate level at both OLLU and DTS, and has been in private practice as a counselor since 1992. She is the founder and director of LifeWorks counseling associates in Dallas, Texas, a collaborative community of creative therapists.When the Day of Evil Comes is her first published work of fiction, and the first of a three-book series. The second work, The Soul Hunter was released in May, 2006. Melanie lives and writes in Dallas.
ABOUT THE BOOK:
As nasty as I knew Peter Terry to be, I never expected him to start kidnapping kids. Much less a sweet, funny little boy with nothing to protect him but a few knock-kneed women, two rabbits and a staple gun…
It’s psychology professor Dylan Foster’s favorite day of the academic year…graduation day. And her little friend Christine Zocci’s sixth birthday. But the joyful summer afternoon goes south when a little boy is snatched from a neighborhood park, setting off a chain of events that seen to lead nowhere.
The police are baffled, but Christine’s eerie connection with the kidnapped child sends Dylan on a chilling investigation of her own. Is the pasty, elusive stranger Peter Terry to blame? Exploding light bulbs, the deadly buzz of a Texas rattlesnake, and the vivid, disturbing dreams of a little girl are just pieces of a long trail of tantalizing clues leading Dylan in her dogged search for the truth.
“Like water rising to a boil, My soul To Keep’s suspense sneaks up on you…before you know it, you’re in the thick if a frightening drama…Superbly crafted.”---ROBERT LIPARULO, author of Deadfall, Germ, and Comes A Horseman
“Written with passion, a good dose of humor and, dare I say it, soul, this novel reminds us that we all, with grace and good fortune, bumble our way toward salvation.”---K. L. COOK, author of Late Call and The Girl From Charmelle 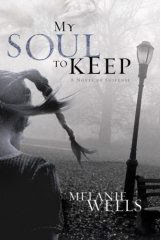 Hey, Spunk on a Stick! love that name. Thanks for the mention of my book! It helps so much for readers and bloggers to get the word out!