This week, the Christian Fiction Blog Alliance is introducing
Broken Angel (WaterBrook Press (May 20, 2008)
by Sigmund Brouwer
ABOUT THE AUTHOR:
Sigmund Brouwer is the author of eighteen best-selling novels for children and adults. His newest book is Fuse of Armageddon and his novel The Last Disciple was featured in Time magazine and on ABC’s Good Morning America. A champion of literacy, he teaches writing workshops for students in schools from the Arctic Circle to inner city Los Angeles. Sigmund is married to Christian recording artist Cindy Morgan, and they and their two daughters divide their time between homes in Red Deer, Alberta, Canada and Nashville, Tennessee.
ABOUT THE BOOK:
Her birth was shrouded in mystery and tragedy.
Her destiny is beyond comprehension.
Her pursuers long to see her broken.
She fights to soar.
A father's love for his daughter…a decision that would change both their lives forever. But who is she really─and why must she now run for her life?
Caitlin's body has made her an outcast, a freak, and the target of vicious bounty hunters. As she begins a perilous journey, she is forced to seek answers for her father's betrayal in the only things she can carry with her─a letter he passes her before forcing her to run, and their shared memories together.
Being hunted forces Caitlyn to partner with two equally lonely companions, one longing to escape the horror of factory life in Appalachia and the others, an unexpected fugitive. Together the three will fight to reach a mysterious group that might be friend or foe, where Caitlyn hopes to uncover the secrets of her past...and the destiny she must fulfill.
In the rough, shadowy hills of Appalachia, a nation carved from the United States following years of government infighting, Caitlyn and her companions are the prey in a terrifying hunt. They must outwit the relentless bounty hunters, skirt an oppressive, ever-watchful society, and find passage over the walls of Appalachia to reveal the dark secrets behind Caitlyn’s existence–and understand her father’s betrayal.
Prepare yourself to experience a chilling America of the very near future, as you discover the unforgettable secret of the Broken Angel.
In this engrossing, lightning-paced story with a post-apocalyptic edge, best-selling author Sigmund Brouwer weaves a heroic, harrowing journey through the path of a treacherous culture only one or two steps removed from our own.
If you would like to read the first chapter, go HERE. 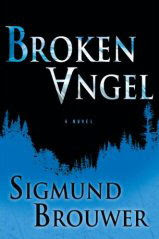