Wonder what ever happened to Google Books? Between lawsuits, settlements, and issues, the project sits in limbo right now. Read the full story at the New Yorker

Can anyone identify these birds? 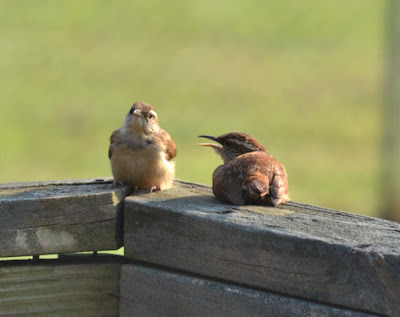 Yes, they’re cute. But they and their mom have been snacking on my tomatoes. Not cool. 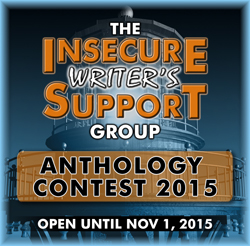 The IWSG Anthology Contest is open until November 1st.

You don’t want to miss this opportunity!

Ten winning stories will appear in a royalty-paying anthology next year. 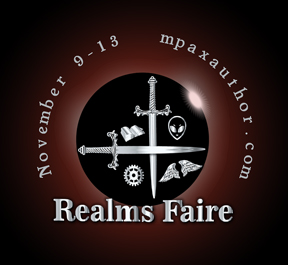 The Realms Faire is coming!


A Thunderclap is set up to announce the Faire before it begins. If you can support us through Facebook, Twitter, or Tumblr, please sign up for the Thunderclap.

Hosted by MPax. Prizes for the winning knight. Prizes drawn daily for the crowd.

Up to 10 knights can joust. Each will battle daily. Magic words will be granted to each knight to pass out to their adoring fans. Knights score points by commenters using their magic words. Knight with the most points at the end of the week wins. What does the knight win? A year of promo on my blog in the slider and a tumbler printed with your championship boasts and badge.

Winners are drawn daily from the adoring crowds.

A vortex opens. Five people are trapped in the Underworld with only one way out – challenge an immortal to a contest of skill. The odds are against those brave enough to accept but enthusiastic fans can help them win their freedom with magic words given to each contestant. Daily prizes awarded to each challenger and a commenter chosen at random.

Your character squares off with another writer’s darling. Can you win? The audience decides.

You are charged with tracking down the unicorns!

Every day, a new blogger will host a photo. You will have to find the unicorns in the image, much like the famous “Where’s Waldo?” Leave a comment stating how many unicorns you find in that image. The most correct guesses out of five, wins.

Prizes will include books and gift cards.

Five images – many unicorns – only one winner!

Hero’s beware! Here at the House of Hero’s Dilemma, a new cliff-hanging adventure will dangle new heroes above the depths of destiny or despair. In 100 words or less, a hero will face a danger in story form.

Each day, the people of Realsmdom will decide the fate of these heroes in three sentences or less. If fateful endings are giving answer in poetic form, an extra entry for prizes will be awarded.

Daily e-book prizes will be awarded via random name-pulling from the entries. Everyone is invited to participate.

People of Realmsom, you have the power of storytelling might to decide the fate of the would-be heroes. Will they die in glory or shame, live in victory or defeat? It is up to you.

And, after you have decided the fate of the Hero’s Dilemma, try your hand at the other Realms Faire Events for more fun and prizes!

Come by and soak a blogging friend with wet sponges… or witticisms. Prizes drawn daily.

Each day I will give clues to a famous ghost from literature or movies. I’ll give new clues throughout the day until someone guesses the right ghost. The first one to guess correctly will get a $5 Amazon gift card and a bundle of ebooks. The only rule is that the same person can’t win the daily game more than once.

At the end of the week everyone who left a comment will be entered into a drawing for the grand prize which is a $30 Amazon gift card and a bundle of ebooks.

I am a book so popular they made a movie of me. Within the what if realms I lie. Horror? Fantasy? Or am I Sci-Fi? A riddle every day during the Realms Faire for you to take your best guess and have a chance to win a prize most splendid.

Every book offered as a prizes will be hidden behind a doorway. Under each door will be the blurb for the hidden book. Each correct answer will be put in the drawing for the book given as a prize. random.org will be used to pick the winners.

Warrants of arrest have been issued for select authors accusing them of witchery and wizardry. The pillory has been erected and the trial dates set.

Good people of Realmsdom, I call upon you to bear witness to these trials and offer your testimony for or against the author’s crimes.

Points will be awarded for wordsmithing a comment in your best Olde English afore 8 of the clock in the Eastern time on the following scale:
5-Ye speak as one from the days of Queen Bess.
4-Ye could pass muster as a Ren Faire cast member
3-Ye could pass as a Ren Faire attendee
2-Ye wouldn’t be foolin’ yer mother
1-Ye stand out like the sun in a cloudless sky

An e-book will be given every day to the witness who scores the most points. Fear not, your daily score will be accumulated and the person with the highest score shall receive a special prize at the end of the week. So, brush off your Olde English and prepare to testify.

Hosted by Realms Faire. Prize packages up for raffle.

Are you participating in the Realms Faire?