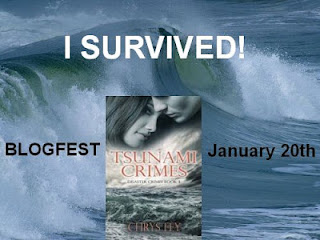 Today I am participating in Chrys Fey’s I Survived Bloghop. She is celebrating the release of Tsunami Crimes (Disaster Crimes Book 3) which comes out today, January 20th.


She gave us the first paragraph as a prompt and took it from there:

"This is Chrys Fey reporting for Disaster 5 News. I am in Eastern N. Carolina where a tsunami hit yesterday morning. I have Diane Wolfe with me, a survivor of the tsunami. Diane, can you tell our viewers what happened, and how you survived?"

Well Chrys, I was in Willmington packing up after one of my publishing seminars at the local community college when the siren went off. The weather was clear, so I knew it wasn’t a tornado warning. I tossed the rest of my things in my Sante Fe, started my SUV, and peeled out of the parking lot.

It’s a good thing the college is downtown and 3rd Street connects with the highway leading to Interstate 40. I looked back in my rear view mirror and about lost it. The wave was surging up the river not far behind me, the water spilling out onto the roads. In seconds, the wave was almost beside me. I must’ve been doing 90 mph when I blew through the main intersection and up the ramp that led away from downtown.

I didn’t slow down, either. I wasn’t sure if I was safe yet. After a maddening wait at the next light, I turned onto I-40 and beat feet for home. Traffic was picking up at this point as people surged out of town. I suspected I was out of danger, but adrenaline still charged through me, and I didn’t slow down until I reached my exit almost an hour later.

Poor Wilmington! All those homes and businesses along the ocean and river. I’ve heard downtown was devastated. I hope most people got to higher ground in time. Hopefully someone remembered the horses that pull the trolley car!

BLURB: Beth and Donovan have come a long way from Hurricane Sabrina and the San Francisco earthquake. Now they are approaching their wedding day and anxiously waiting to promise each other a lifetime of love. The journey down the aisle isn’t smooth, though, as they receive threats from the followers of the notorious criminal, Jackson Storm. They think they’ll be safe in Hawaii, but distance can’t stop these killers. Not even a tsunami can.

This monstrous wave is the most devastating disaster Beth has ever faced. It leaves her beaten, frightened. Is she a widow on her honeymoon? As she struggles to hold herself together and find Donovan, she’s kidnapped by Jackson's men.

Fearing her dead, Donovan searches the rubble and shelters with no luck. The thought of her being swept out to sea is almost too much for him to bear, but the reality is much worse. She’s being used as bait to get him to fall into a deadly trap.


If they live through this disaster, they may never be the same again.

a Rafflecopter giveaway
at Friday, January 20, 2017