But before we get to that, I asked her to share some things you might not know about her. This was she told me:

I wanted to be an archeologist and had that as my life plan until I hit college. Then I discovered how woefully ill-equipped I was. I’m not a patient person. I tend to rush to the end of things so I can move on to the next item. Using a delicate brush to very carefully reveal tiny shards from the long-lost past, just wouldn’t have worked. Besides, I turn into a crispy critter in the sun (there are a lot digs in the desserts of the world), I truly dislike being cold (I’m thinking Iceland and Vikings here) and closed spaces make me crazy (Siberian caves would send me off screaming).

This may or may not be a secret, but I’m a neat freak. My husband doesn’t dare set anything down where it doesn’t “belong,” or i put it away. My grandmother was like this and my mom, so it’s in my DNA. My husband often says he wishes he’d known this proclivity of mine sooner. He always says this just before he stomps out the door looking for that tool he set aside to do a repair job. “Sorry, dear.”

I love to cook, and I seldom repeat a menu because there are so many delicious things to try. My favorite foods are Indian (all kinds from north to south of that continent) and anything middle-eastern. It’s the cinnamon, turmeric, and garam marsala that appeal to my taste buds.

I prefer to grow my own veggies, and often graze in my garden while I weed or prune stuff. A lot of my produce never sees a kitchen. Tomatoes and carrots are often lunch. 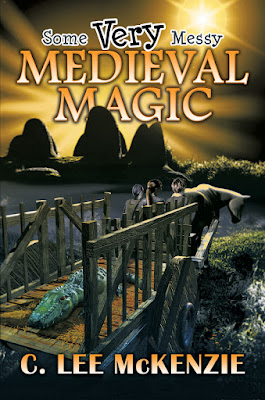 Pete and his friend Weasel thought they’d closed the Time Lock. But a young page from medieval times, Peter of Bramwell, goes missing. His absence during a critical moment will forever alter history unless he’s found.

There’s only one solution - fledgling wizard Pete must take the page’s place. Accompanied by Weasel and Fanon, Pete’s alligator familiar, they travel to 1173 England.

But what if the page remains lost - will Pete know what to do when the critical moment arrives? Toss in a grumpy Fanon, the duke’s curious niece, a talking horse, and the Circle of Stones and Pete realizes he’s in over his young wizard head yet again...

“A gripping adventure back in time, with action around every corner.” - Stephanie Robinson, author of The Secret Files of Fairday Morrow

“A great addition to middle school classrooms and libraries, as well as your own private library.” - Beverly Stowe McClure, award-winning author of stories for children and teens.

“This third book in the Adventures of Pete and Weasel series was as much fun as the first.” - Kai Strand, author

“A rich cast of characters who bring the story to life – both in modern and historical times. I highly recommend librarians and teachers get this series on their shelves.” - Hall Ways Reviews

C. Lee McKenzie has a background in Linguistics and Inter-Cultural Communication, but these days her greatest passion is writing for young readers. When she’s not writing she’s hiking or traveling or practicing yoga or asking a lot questions about things she still doesn’t understand.
Website / Facebook / Twitter


Plus check out the book trailer for the series: