Hosted by Bish Denham to celebrate 8 years of blogging and co-hosted by Alex J. Cavanaugh.

My list is of favorite theme parks, with three dream parks thrown in, and their roller coasters. 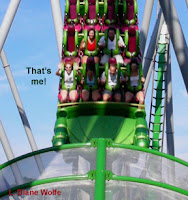 Located in Orlando, I’ve been there twice now and get to go again next year. We’re staying on site with fast passes for all rides. The park boasts two great coasters - Incredible Hulk and Dragon Challenge (which I still call by its original name, Dueling Dragons.) I almost fell asleep on the
Incredible Hulk once while waiting for it to launch! With seven inversions, it’s a smooth B&M coaster.

Add in Universal Studios itself, and there are three more coasters - Hollywood Rip Ride Rocket, Woody Woodpecker’s Nuthouse Coaster, and Revenge of the Mummy. (Technically not a coaster, but close.)

Tied with Islands for my favorite, I’ve visited this park four times! It’s the most beautiful park in America, with shows and animals along with the rides. It now boasts seven coasters - Loch Ness

It was also home to several now defunct coasters, including the Big Bad Wolf and Drachen Fire. The latter was the first coaster I ever fell in love with and I’m glad I got a chance to ride it before they tore it down.


Its most famous defunct coaster was Son of Beast, the first wooden coaster with a loop. Not sure why it failed, but I was fortunate enough to ride it before they tore it down.

If you love animals, Sea World is one of the best parks. You can see orcas, feed the seals, and pet the dolphins. We’ve been twice and seeing or foster daughter Ashely pet a dolphin was the greatest joy.


It’s home to two coasters, Kracken and Manta, with a third, Mako, opening summer of 2016. With seven inversions, Kracken is probably the most intense B&M coaster you will ever ride.

Located in Virginia, this park has some unique coasters, including the Anaconda, which dives underwater, and the Rebel Yell, which you can ride forward or backwards.

My dream parks are: 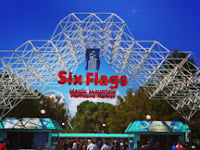 Located in California, Magic Mountains shares the title of Roller Coaster Capital of the World with Cedar Point in Ohio. (Sadly, I’ve been to Cedar Point and was very disappointed.)


Shambhala is Europe’s tallest roller coaster at 249 feet with a 256 foot drop. However, the coaster I most want to ride is Dragon Khan. Boasting eight beautiful inversions, it’s been dream coaster of mine ever since I got a coaster video featuring a ride on the beast.


The top coaster is Steel Dragon 2000. When it was built, it was the tallest (318’) and the fastest (95mph), just beating out Cedar Point’s Millennium Force. It would be my first ride of the day if I visited!

Have you visiting any of these parks? Which park is your dream theme park?

The Realms Faire is coming in just two weeks! I’m hosting The Unicorn Hunt, and there are almost a dozen games with tons of prizes. You don’t want to miss it.