News from around the Internet -

“Barnes & Noble Inc. ( BKS ) and Microsoft Corp. ( MSFT ) have agreed to revise their partnership, allowing the bookseller to stop developing an app for its Nook e-reader that would work on Windows 8 devices or a Windows Phone. Instead, the maker of the Nook will provide reading content for Microsoft's new consumer reader platform.

“Microsoft made a big investment in the bookseller's Nook digital-book business about two years ago. The deal pitched Microsoft into a high-stakes battle with Amazon.com Inc., Apple Inc. and Google Inc. and allows Barnes & Noble to continue investing in the business. But since then, Barnes & Noble has scaled back in the hardware space amid a sharp decline in sales and has laid off a big chunk of the segment's work force.”

Looks like B&N us doing what it can to stay afloat - will it be enough?

From Wired - The Future of Books Looks a Lot Like Netflix

“Today, the San Francisco-based literary startup Plympton launched an online fiction service called Rooster. It’s sold by subscription. It’s priced by the month. And it automatically delivers regular content to your iPhone or iPad. In other words, it’s a book service that looks a lot like a magazine service. And it’s just the latest example of how books are being packaged like magazines.

“With Rooster, readers pay $5 per month in exchange for a stream of bite-sized chunks of fiction. Each chunk takes just 15 minutes or so to read, and over the course of a month, they add up to two books. The service builds on the success of Plympton’s Daily Lit, which emails you classic literature in five-minute installments.”

This might be a great way to expose readers to new authors and books if the big boys don’t dominate it.


And a little update on Spunky - he’s five weeks past his surgery and doing great. This weekend we let him out of the crate for good and he can be a normal cat again.

The photo was taken a week ago, but you can see the fur is growing in over his scar. Yes, it’s a big one! 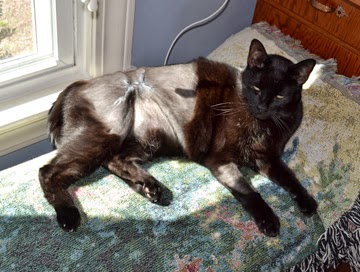