Reflecting on the Loss of Friends 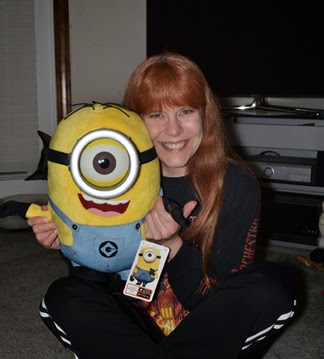 I hope everyone had a great Christmas and New Year’s. Last year, my husband and I were both sick, so it was nice to enjoy the holidays this time. We enjoyed Christmas with just the two of us. Technically four when you count the two black cats that were playing in the shredded wrapping paper. I had fun stirring them up even more with my new Despicable Me Talking Minion. He talks, giggles, and sings!

One thing happened that made me reflect on friends past and present. Before my husband and I were even dating, we worked for a contracting company in Arkansas and were good friends with another employee, Debbie. She was one of those happy, free spirits that is a joy to be around. We lost track of her for a couple years, and then got to visit Debbie and her husband in Orlando on several book signing treks south.

We didn’t get a Christmas card in 2012, and I don’t think I sent one. But I sent one for 2013 just to let Debbie and her husband know we were thinking about them and missed them.

We get a letter from her husband, apologizing that he didn’t have our address and the phone number he’d tried was disconnected.

My husband and I are still in shock. It was due to a situation with her family, but we just can’t fathom Debbie killing herself over it. Our heart goes out to her husband.

I went through my photo albums and gathered every photo I could find of Debbie and sent it on a CD Rom to her husband. As I looked through the pictures, I thought of other friends I’d not seen or spoken to in a while. I was an only kid, so solitude is often my thing, and I wonder if that works against me sometimes. How many friends have slipped away because I haven’t maintained contact? Even the Internet, it’s easy to let time pass without interaction. That’s something I need to work on.

How many friends have you lost contact with due to neglect? Can you do something about it now?
at Friday, January 03, 2014