Sad Day in Roller Coaster History: The End of Son of Beast

A little something different today.

I am a die-hard roller coaster fan. About 14-15 years ago, my husband took me to Busch Gardens, just to see how I would handle riding a big coaster. It scared me to death even as I fell in love with the thrill. Hundreds of coasters later, I still enjoy it.

That is why the following news saddened me:

On October 4, destruction began on this record breaking coaster at King's Island:

From the Dayton Daily News:

After several reported injuries, the ride was closed late 2006 and reopened in 2007 minus the loop. After more injuries, it was closed again in 2009 for the final time. (Only one incident was blamed on the design by the Department of Agriculture.)

I was fortunate enough to ride this coaster the summer of 2005 and before the loop was removed. Like any twisting wood coaster, it was rough, but far less rough than The Beast itself. I remember the loop, as it was a surreal feeling to enter a loop on a wooden coaster. I enjoyed it and road Son of Beast several times.

Now it is gone. And all I have is this t-shirt: 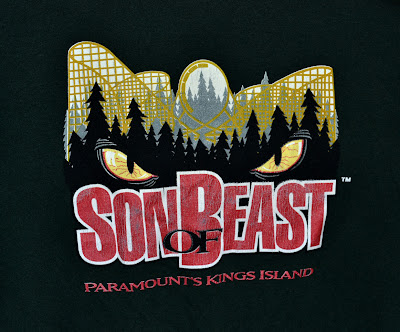 Any ride or park from your memory now wiped from existance?