A New Twist on Book Promotion 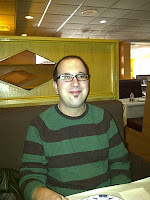 Today I welcome author Jamieson Wolf! Jamieson and I ‘met’ online several years ago and I’ve always admired his honesty, determination, and creativity - not to mention the fact the man writes like a maniac! I swear he gets an extra ten hours a day that passes by the rest of us.

I asked Jamieson to elaborate on some of this online promoting success and a new twist that just might spur your imagination...


The Scent of Success
Jamieson Wolf
I’ve had a lot of readers ask me why I decided to design my own cologne. They seem confused by it. But to me, it seems like a natural extension of my words. But I’m getting ahead of myself, let me explain.

I have been a writer for many years and have done everything and then some to promote my work. I’ve done chats and interviews, blogging, web sites and mini-sites. I’ve done book trailers, soundtracks, character Tweets, Facebook fan pages, contests and give aways and free ebooks.

I’ve done blog tours, physical tours, speaking engagements, had my work published in magazines and anthologies. I did guest posts, podcasts, press releases. And all for nought. Well, that’s not true. The promotion did help. But after a while, I began to wonder if there was anything else I could do to promote my work having already done everything I could think of.

I have always loved cologne. Growing up, my mother always told me that a boy has two things they must always do: ensure they obey hygiene and ensure they smell good. Thankfully the second piece of advice has given me a love of scent.

Cologne is used for more than making us smell good. It expresses how we are feeling, enraptures a romantic love interest, makes people turn and pay attention (hopefully because the cologne smells good rather than like a dead skunk). And the same can be applied to books.

When the first novel in my Hard Series (aptly titled HARD) became a Number One Best Seller (I just love telling people that), I knew I had to do something different to mark this occasion. So I decided on making my own cologne for men that would help to promote my work at the same time.

Working with the designer, I was able to create a scent that had hints of lavender, coffee and amber. The result is a scent that is alluring, engaging, light and spicy. And the response has been incredible.

I’ve gone through two shipments already and have been shipping out more. At first, I was baffled by the cologne’s success but then one reader summed it up perfectly for me: It’s like you’ve captured the scent of romance from The Hard Series and put it in a bottle.” She said. “And what brings a book to life more than a scent that exists outside of our imagination?”

I couldn’t put it better myself.


Jamieson Wolf
Words that satisfy every need…
at Thursday, January 13, 2011

so do you get a bottle with the book?

Never would've thought of cologne! Do I want to capture the essence of CassaStar though? Somehow, I don't think mechanical sweat has much appeal!

Thanks for the lovely comments so far!

Nope, no bottle with the book, but I am going to work on sending out free samples to everyone who orders a copy of the book in the series. Stay tuned for that!

And Alex (your book rocked BTW) there have been odd smelling scents for years! GAP had one that smelled like grass (aptly named Grass) at one point.

Why not embrace the tech culture by giving them something that smells like a spaceship? The scent of metal and determination? LOL

Its not how you feel, its how you smell. And you smell marvelous (bad Billy Crystal imitation). Now I'm thinking of making a really great Cabernet Sauvignon or Merlot to go with my book. That'll attract people to a book signing. best wishes for your continued success!

A wonderfully written post,the cologne issue took me back to my childhood my uncle and his father owned a bath cube factory (I think they are out of date now ) and my brother worked there he was always coming home smelling lovely,
Thanks for the memories.

Great idea for out-of-the-box promo! And good for you for doing what you love to do.

This really has my thoughts spinning about. I like Stephen's idea of a wine. Maybe I could put together a special tea.

Wow... I didn't know people who weren't movie stars or singers could get a cologne created for them! Very neat.

That's cool but I wish I knew more about your book. Where can I find more information. The link didn't work.
CD

Thia is so clever. And it makes so much sense. I mean, one of the things I love so much about Harry Potter is that they actually made sweets and candy from the book. It was like, as you say, an extension of the words, and it engaged all the senses.

Great tips, and I agree that QR codes are a brilliant way of marketing (curiosity always gets me when I spot a QR code). The cologne angle is a new one; I'd be tempted to brew my own brand of mead to promote my fantasy novel :D

Thanks for guesting today, Jamieson! I wonder how I'd bottle up spunky and enthusiastic?

Love this idea. I have a friend who went through a cologne period. She made one for me. I think she called it the Smell of Hel. Wasn't my favorite.

I tell people they need to revisit their writing to find all the possible angles and associations for promotion. Great Job, Jameison!

Best,
Carolyn Howard-Johnson
Author of the multi award-winning (I love to say that, too! Jameison!) HowToDoItFrugally series of books for writers

I love the thought of designing colognes and perfumes... what a great thing to do! Hm, I think The Hating Game would be quite spicy,m with maybe a hint of citrus.

I think it's a brilliant idea & it works well w/ the title & the sense [scents!] of naughtiness! Smell is such an important sense & it can change our mood & cheer us up.

Hmm, never thought of creating a perfume to go along with a book's release. I need something for my next book. Oh, but the ideas are bubbling.

A great idea, Jamieson. I'm glad it's working so well for you.

What a clever idea!

Now that's some creative thinking with a nice personal touch.

What a novel idea...

Hi Diane and Jamieson - no wonder Jamieson made you sit up and think Diane!

What a great idea - very clever .. and such fun - a great way to partner perhaps? Cheers .. Hilary