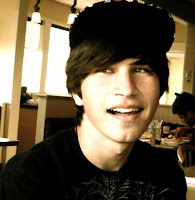 Every now & then, I meet someone with such incredible potential as an author, as a speaker, and as a person.

Last spring I met Alex at a small book festival and was just so impressed by this young man. (He's only 18!) His mannerisms and speech suggested someone older and far more polished. If Alex continues to fine-tune his writing skills and holds on to his dream, he will one day experience great success!

Here is an excerpt from Alex's work:

Where the sky is gray and dark.
The world that yearns for completion finally receives.
The Savior shall be born among the feet of high peaks.
The stars will blaze with the fire of Dragons on the night.
He shall walk the world and the Sun shall hang above in the sky.
The weapon he shall wield will be one forged of metal and magic.
He shall cast darkness away into the light.
This weapon shall not only sever darkness, but heal.
And heal it shall, the broken realm of Kings.

Apprentice Oroth’s finger traced over the words taking each one in. “Oroth,” his master called. Oroth turned back to the hissing, glowing orange forge.

Master Lazar, out of his customary Lumuid robes, seemed almost alien in a blacksmith’s leather apron. Yet, he wielded a hammer with skill that even the most adept blacksmith could not achieve.

Oroth worked the bellows as the flames flared to a white-hotness. He paused and wiped his brow. The crackle of otherworldly energies filled the air as unbridled magic surged from Lazar’s, fingertips sizzling upon the hunk of dwarven steel that lay in the heart of the fire.

The white energy glided and shaped the metal into a sword blade. Lazar swiftly whipped around, grabbing a pair of tongs. “Stop Oroth,” he shouted, over the roar of the fire. And then Lazar thrust the tongs into the flames, snatching the metal from the greedy tongues of fire and placed it on the anvil.

Oroth jumped back from the bellows, and with presumption beyond his thirteen cycles, he went to the corner well and filled a bucket. He knew somewhat of the workings of a forge and the process of creating a sword.

He returned to see Lazar bending over the still white-hot blade with a small knife. Before Oroth could move Lazar slit the vein at his wrist. As an apprentice Oroth could not question his master, but confusion and panic rushed through him seeing flesh so carelessly mutilated.

Muttering an incantation, Lazar let the dark blood fall onto the metal. Oroth stood, rooted, watching the blood hiss upon the blade. Not bothering to bind the wound, which had blood still dribbling from it, Lazar strode over to a table. Returning he grasped an empty, ornate hilt.
Oroth then remembered the bucket at his side and hurried over to the anvil. Lazar glared at him with eyes, the color of dull steel.

“Throw the water on it,” he said, pointing to the blade.

Unquestioningly, Oroth dumped the bucket over it. Suddenly he felt the breath of winter amid the heat, and there sat the blade cool and shiny, as if it had been done for days.

Lazar then took the blade in his hand, ignoring the pain as it cut into his flesh. Looking at his shocked apprentice he said in a low voice, “Oroth, my companion, I now give you one final charge. Take this sword to the elven prince, Onder. Once you have done so, it will be your choice to join him or not.”

With confusion clouding Oroth’s thoughts and before he could speak Lazar finished his final work. He joined the hilt and blade, with a great crash that shook the room. Then there was a blinding flash of white light that pierced Oroth’s eyelids. And then silence. Once the light faded Oroth opened his eyelids. Lazar was gone and his last words echoed in his head. His hand rested on the now cold anvil and twitched, tapping something hard.

He looked down to see the sword laying there, in one piece. Red was streaked through the blade, like blood. He picked it up feeling a strange warmth within the hilt. Deep in his heart Oroth now knew what he must do. Holding the sword carefully, he left the forge as the flames flickered out, but stopped to grasp the parchment that held Zebinalin’s salvation.