Q&A and One Day Only Giveaway! 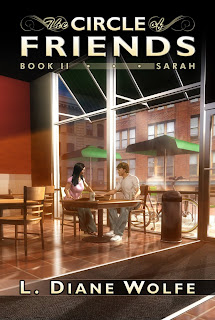 Tomorrow is Cinco de Mayo - and the release of Book II of my YA series!

Leave a comment here (or at my DeviantArt site - see below) for a chance to win a copy of The Circle of Friends, Book II...Sarah. Those who sent in questions are already entered but may leave a comment to be entered twice! Winner will be drawn at random tomorrow morning and posted on both sites.

And now, the answers to all of your burning questions...
Although no one asked THE question!!!

How did you start writing? When did you realize you wanted to be a writer?
I started writing when I was thirteen. I’d picked up an Anne McCaffrey book, The White Dragon, and I knew from that moment on I wanted to be an author. I wanted MY name on the cover of a book! Took me almost twenty years, but now it’s a reality.

You are constantly, mind-bogglingly, busy. You would have to be an organized person to do all that you do. What techniques do you use to stay focused and on track?
It may amuse you to know that I have a very short attention span and lots of nervous energy! What saves me is the fact I am indeed incredibly organized. I keep a large notepad at my desk with a daily to-do list. I keep a master calendar with all of my physical dates and a master list of all my virtual appearances, articles & scheduled postings. I also maintain a detailed checklist of promotions for each book. I’m just real careful to keep everything organized and grouped so I stay on track!

What made you decide to start writing and why in the self-help area?
I’ll go for a two-part answer on this one!
I’ve always been a voracious reader, and as an only child, I possessed a vivid imagination. When I began reading Anne McCaffrey’s books, that’s when I really began to apply myself as a writer.
My self-help book was a natural progression of events. I spent ten years with a top motivation training system and devoured hundreds of self-help, relationship, and success books. Success principles are universal and I eventually felt confident enough to put together two seminars, one on goal-setting and the other on leadership. Attendees to my workshops began asking for a book, and this prompted me to combine the two seminars into one simple, devotional-style success book.

What were the challenges in changing from Fiction to Non Fiction?
It’s a totally different mindset! When writing Overcoming Obstacles with SPUNK!, I felt like I was working on an essay. I had to rely heavily on extensive notes and a detailed outline. Starting the project was much more difficult, too. One still has to master storytelling though, even in non-fiction. And the nice thing about non-fiction is I did not have to start at the beginning! I actually began with the second section, which is Key Two.

Do you use an outline or do you let the story lead you?
I always outline before I begin writing my story.
However, I have usually let the story run its course in my head, as if I were watching a movie. (This is after I’ve already designed the characters.) Once I feel I have a grip on the story, I begin to outline the major plot points. As I write, I usually stick pretty close to my original outline, too.

What do you like LEAST about your job?
The detail work! Composing letters to libraries. Printing address labels and stuffing envelopes. Updating my schedule online. Editing articles. Endless hours searching the Internet. It’s these little things that suck up a lot of time and simply drive me nuts sometimes!
Everyone thinks an author’s life is all about appearances and interviews, but the mundane detail stuff is the reality.

How do you book your speaking engagements? I like to ask all speakers this in case they do something I don't!
I’d started with writing groups and book clubs. (I’d already spoken many times at business functions and meetings, so I enjoyed it.) An author friend prodded me to put together a promotion seminar and started teaching these at NC community colleges. (I now do five such seminars on a regular basis!)
What really sparked other speaking opportunities were recommendations from those who attended my seminars.
Recently I was accepted into the National Speakers Association, and it has led to even more speaking engagements!

Which of your characters would say you're most like? Did you mean to base this character off of yourself, or did you start writing and then later realize this character reminded you of yourself?
When outlining Book I, I gave Lori two best friends. As the character of Sarah developed, I realized she possessed some of my qualities. She was bold, daring, and struggled with a poor self-image. (Her self-esteem issues later became the basis for Book II’s story.) I saw a lot of myself in Sarah as I wrote that story! Book II was the easiest to write and remains my favorite to this day.

Are any of the characters based on Craig or remind you of Craig?
I didn’t intend to base any of the characters on my husband, but he closely resembles Jason, from Book I! He’s very protective of me and definitely the one in charge.
There’s a lot of sports in your series – do you like sports a lot?
I love sports! Football season is my favorite time of year. I also enjoy hockey, the Olympics, and college sports. Baseball bores me on TV, but I love going to see minor league games. Ironically, I didn’t care for team sports in school – I ran cross-country and track. And while I love swimming, I never competed. Way too slow a swimmer! That, and I prefer to hang out underwater.

Have you written a character and then later met someone exactly like them? If you haven't and you eventually did meet someone just like one of your characters what would be your reaction?
I often meet people who possess some of the qualities of certain characters. I’ve never met anyone just like any of my characters, but I’d certainly like to meet a Matt one day, because he’s so much fun!

Is the new book title the FIRST title you had in mind - or did the title change as the manuscript evolved, and why?
I was using the main character’s names as working titles while I tried to conjure up a good series title. My husband is the one who accomplished that! He suggested The Circle of Friends since the five books all centered around one group of friends. I liked it and ran with it!
What made you think you might be good at writing books?
I was always good at English and took a lot of creative writing and journalism classes. My teachers always encouraged me to write. Like most writers, I felt I had a message, and a book seemed the best way to convey that message to others. (I also get to share that message now through public speaking.)

Do you foresee experimenting with other genres of fiction?
Yes I do! I will likely stay with YA, but broaden into areas such as horror and sci-fi. My goal right now is just to reach the end of this series and take a deep breath!
Did anyone in specific play a large or inspirational part in motivating you to start writing?
As a teen, my Freshman English teacher really encouraged me to write and pursue that avenue. That spurred my writing and I still have dozens of notebooks filled with stories and ideas.
It was my husband who encouraged me to finally realize my dream and write a book. He is my greatest cheerleader!

What comes first for you when you set out to write a book: the story or the characters? I ask this because your stories have such amazing characters living in such real situations. I'm curious to know whether you think of the character first or the situation that they will find themselves in.
The characters! I always envision the inhabitants of my stories first and complete a detailed character sheet for each one. I might have an idea for a storyline, but I don’t start outlining until I define the main characters. I feel I can stay true to their personalities in this manner and not force them to do something unnatural just because that’s the story line.

How did you come up with the names for your characters?
I dreamed the two main characters in Book I, so I already knew their names. The others were divine inspiration! It was important that the names be simple yet solid. Seven of the main character’s names came from the Bible. For secondary characters, I searched online baby names sites. Several names came from fan suggestions, especially in Book V. (Some of these I simplified – Josiah became Jo.) A couple fans have been so enthusiastic in their devotion, I’ve even used their names in my books as a tribute!

Check back tomorrow to discover the winner!
Also visit my Deviant Art site to comment as well- http://spunkonastick.deviantart.com/
at Monday, May 04, 2009