Today I would like to welcome author Heidi Thomas!

First let me give you a little background on Heidi:

Raised on a ranch in isolated eastern Montana, Heidi Thomas has had a penchant for reading and writing since she was a child. Armed with a degree in journalism from the University of Montana, she worked for the Daily Missoulian newspaper, and has had numerous magazine articles published.
A tidbit of family history, that her grandmother rode steers in rodeos during the 1920s, spurred Heidi to write a novel based on that grandmother’s life.
Cowgirl Dreams is the first in a series about strong, independent Montana Women.
Heidi is a member of Women Writing the West, Skagit Valley Writers League, Skagit Women in Business, and the Northwest Independent Editors Guild. She is an avid reader of all kinds of books, enjoys hiking the Pacific Northwest, where she writes, edits, and teaches memoir and fiction writing classes.
Married to Dave Thomas (not of Wendy’s fame), Heidi has no children, but as the “human” for two finicky felines, describes herself primarily as a “cat herder.”

I feel like a cat herder some days, too!

Heidi is currently promoting her book, Cowgirl Dreams, and was gracious enough to answer some questions: 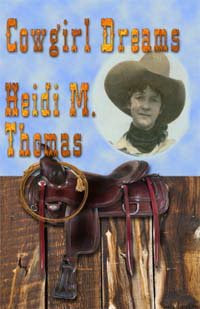 Tell us about Cowgirl Dreams…

This is the story of Nettie, a young woman who has a dream—to become a rodeo star, against many obstacles, including her own mother. She is a strong, independent woman who has a goal and will do almost anything to achieve it. The book loosely parallels the life of my grandmother who rode steers in Montana rodeos during the 1920s.

What made you select your grandmother’s tale to tell?

This was such a fascinating thing, having a grandmother who was a rodeo rider (she rode wild steers). I thought it was incredibly brave and so unusual, and of course that prompted the writer’s question “What if?” I just had to write a story about her.

Can you tell us a little about the sequels…?

The sequel to Cowgirl Dreams has a working title of Follow the Dream, and it is the second half of Nettie’s life, after she marries. Her dream of rodeo stardom lingers, but family obligations, drought, and the Great Depression delay that dream further.

The third book in the series, working title Land of Milk and Honey, is about the next generation, Nettie’s son and his German war bride. This one is based on my mother’s story, when she meets my father, an American soldier during the occupation of Germany after the war ends, and after he is shipped home, accepts his proposal to come to America and marry him. Again I see this as a very courageous venture, moving so far from family, to a foreign country where she didn’t speak the language, where she was regarded as “the enemy,” and where she didn’t know anyone except this man she hadn’t seen in two years.

The fourth book, Rescuing Samantha, is purely fiction, but my character is Nettie’s great-granddaughter, who moves from the big city to the old family ranch, hoping to make a go of raising thoroughbred race horses, again against financial and climatic odds.

Tell us about the classes you offer in beginning fiction and memoir writing.

After I’d started sending out queries on my first book (which is now the third in the series), I received a couple of comments from agents or editors, stating that my characters were “flat.” I didn’t know what that meant or how to fix it, so I enrolled in an extension course in fiction writing through the University of Washington. After that, I thought I would like to share what I had learned with other beginning writers, so I stepped out of my comfort zone and started a community fiction class. And because most of my novels came from family history, I realized the importance of preserving those family stories and memories, so I now teach a memoirs writing class as well.

Yes, my degree is in journalism and I had quite a bit of experience editing in that genre (I had the world’s best copy editor on the newspaper where I worked!), and later when I started writing fiction, I was in a great critique group where I could hone my fiction editing skills as well. As my skills increased, I began editing for others outside the group and have had great feedback from my clients. I belong to the Northwest Independent Editors Guild.

When do you find time to write, Heidi?

That’s the million dollar question, especially now with adding marketing to my list of things to do. I’m trying to learn to better prioritize my tasks, make lots of lists, and try to remember to “do one thing at a time.” I do have a tendency to try to do everything at once—but that’s a little like walking a tight rope while juggling my mother’s best china.

What’s the best part about living in Washington?

It’s green all year around! When I first moved here from Montana, I could not believe that we had a green lawn at Christmastime! And the early spring with all the beautiful rhododendrons, azaleas, and the acres of tulips all colors of the rainbow. (The worst part, and that’s what makes all of those afore-mentioned things possible, is the rain. Especially during the winter when it’s so gray and gloomy. It’s not the best place for a person with Seasonal Affective Disorder to live!)

Your website show a photo of you with a saddle – do you still ride?

That is my grandmother’s saddle, and I’m so thrilled to have it. I would love to keep my grandfather’s and my dad’s as well, but don’t have the room. I grew up on a ranch in eastern Montana where I rode a lot, but I haven’t ridden a horse in many years now.

What does your family think of Heidi the author?

Oh, they’re so very proud—and supportive! I couldn’t have done this without my family’s love and cheering me on. I’m so fortunate!

And the last word, Heidi…?

You know, it sounds a bit cliché, I suppose, but having this book published (after 10 years in the process) is a dream come true for me. And I’m struck by the realization that we all do need to have a dream. My advice for other writers is to persevere—never give up!

Cowgirl Dreams is available through my website Heidi Thomas (for an autographed copy), and from my publisher Treble Heart Books

Thank you for visiting today. Leave a message of substance and I’ll add your name to a drawing at the end of my tour for some fun prizes!

Join us tomorrow for a Book Review and Podcast Interview at The Bluestocking Guide For a complete list of blog stops, check Heidi Writer

Thanks Heidi and enjoy the ride! 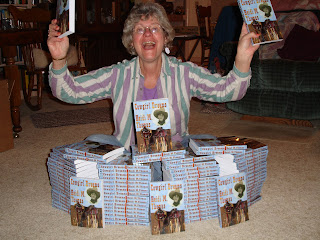