One of those days...

One of those GOOD days!
(Don't we all need them now and then?)
It was a long day - on the road for over six hours - but well worth the time invested.
I attended an author luncheon in Virginia Beach, VA, and while the current state of our economy meant low attendance compared to previous years, the smaller crowd made it more intimate. I met some interesting people and got to chat with the other authors. That in of itself was a treat! I met children's author, Sue Corbett, and Blake Cullen, who's history with the Cubs and Major League Baseball just boggles the mind. Nathan Richardson sat at my table, and he is not only an author & poet, but he teaches self-publishing workshops in the area. (His voice also perfectly matched Trans Siberian Orchestra's narrator!) 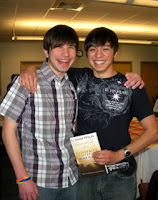 The most impressive was a young man named Alexander Pyles. He has not yet published a book and is only a senior in high school. But he's won many contests and devotes so much time to learning his craft. He was also the most poised young speaker I've ever heard! He had done his research and was already sending out query letters to publishers. I was just really impressed with this young man and predict he will go quite far if he does not give up his dream. (Photo is Alex and his brother, Peter.)
I also sold quite a few books... grin!
The day capped off with a visit to a local bookstore to 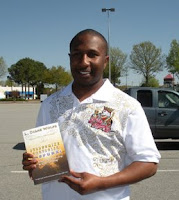 drop off bookmarks - the manager gave me a big hug and asked when I was going to visit - and then I met up with a young man who was in the singles group at our church but moved back to Suffolk recently. We've really missed Corey and it was so wonderful to see him again!
It was just one of those days when everything fell into place, not necessarily in a phenomenal way, but in a smooth and positive manner. I needed that. We all do!
What was your last good day like?
*
at Sunday, April 19, 2009