This week, the Christian Fiction Blog Alliance is introducing
Wind River (Bethany House July 1, 2008)
by Tom Morrisey
ABOUT THE AUTHOR:
Tom Morrisey is a mountaineer, aviator, shipwreck diver, and explorer, who holds a Full Cave certification from the National Speleological Society - Cave Diving Section.
He has launched, edited or contributed to numerous national publications and is an award-winning adventure-travel writer. A popular speaker, he is also active in both evangelism and the arts. Morrisey earned an MFA in creative writing from Bowling Green State University, and his fiction has been featured in numerous anthologies and magazines.
His first novel, Yucatan Deep (Zondervan, 2002) was a finalist for the Christy award, and he is the author of four other novels: In High Places (Bethany House Publishers, 2007), Dark Fathom (Zondervan, 2005), Deep Blue, (Zondervan 2004), and Turn Four (Zondervan 2004). In addition Tom has also written two nonfiction books: 20 American Peaks & Crags (Contemporary Books, 1978) and Wild by Nature (Baker Books, 2001). He and his family live in Orlando, Florida.
ABOUT THE BOOK:
You Can't Outrun the Sins of Your Past
Desperate to forget what happened to him in Iraq, Tyler Perkins flees to the emptiness of Wyoming. He's here to escape and also to fulfill a long-ago promise by accompanying his 86-year-old friend Soren Andeman on a fly-fishing trip--once more for old time's sake. But their trek to an idyllic trout lake soon becomes something more deeply harrowing--a journey that uncovers long-held lies, deadly crimes, and the buried secrets of the past. Ty barely has time to contemplate the question of what constitutes justice when nature unleashes her own revenge. Trapped in a race back to safety, he must face his own guilt-ridden past or risk being consumed.
Powerfully imagined by the acclaimed author of In High Places, Wind River is an engaging wilderness adventure that explores the power of confession, the beauty of forgiveness, and the freedom of truth unveiled.
If you would like to read the first chapter, go HERE
The book link is: http://www.amazon.com/exec/obidos/ASIN/0764203479 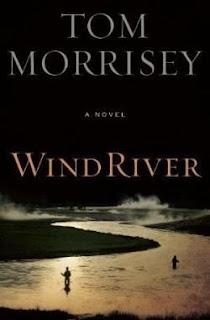