This week, the Christian Fiction Blog Alliance is introducing
Winter Haven (Bethany House April 1, 2008)
by Athol Dickson
ABOUT THE AUTHOR:
Athol Dickson's university-level training in painting, sculpture, and architecture was followed by a long career as an architect then his decision several years ago to devote full time to writing.Athol Dickson’s writing has been favorably compared to the work of Octavia Butler(Publisher’s Weekly), Daphne du Maurier (Cindy Crosby, FaithfulReader.com) and FlanneryO’Connor (The New York Times).His They Shall See God was a Christy Award finalist and his River Rising was a Christy Award winner, selected as one of the Booklist Top Ten Christian Novels of 2006 and a finalist for Christianity Today's Best Novel of 2006.He and his wife, Sue, live in Southern California. Visit AtholDickson.com for more information.
ABOUT THE BOOK:
Boys who never age, giants lost in time, mist that never rises, questions never asked...on the most remote of islands off the coast of Maine, history haunts the present and Vera Gamble wrestles with a past that will not yield. Will she find refuge there, or will her ghosts prevail on...Winter Haven
Eleven years ago, Vera Gamble's brother left their house never to be seen again. Until the day Vera gets a phone call that his body has been found...washed ashore in the tiny island town of Winter Haven, Maine. His only surviving kin, Vera travels north to claim the body...and finds herself tumbling into a tangled mystery. Her brother hasn't aged a day since last she saw him.
Determined to uncover what happened in those lost years, Vera soon discovers there are other secrets lurking in this isolated town. But Winter Haven's murky past now seems bound to come to light as one woman seeks the undeniable and flooding light of truth. 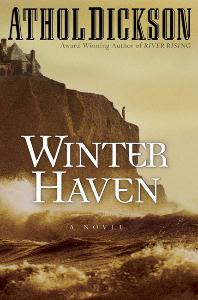