This week, the Christian Fiction Blog Alliance is introducing
Fallen (Kregel Publications February 29, 2008)
by Matthew Raley
ABOUT THE AUTHOR:
Matthew Raley is senior pastor of the Orland Evangelical Free Church in northern California, where he lives with his wife and two young children. For fun, he enjoys playing chamber music with friends, giving occasional solo recitals, and playing first violin in the North State Symphony. This is his first book.
ABOUT THE BOOK:
Jim was at work when his eyes drifted to the coffee shop visible from his office window. An attractive woman driving a Mercedes pulled up to the curb . . . and Jim’s married pastor emerged from the car. When Jim delves deeper into his pastor’s world, will he be able to handle what he discovers? Is he right to suspect that Dave is having an affair? In the behind-the-scenes church battle that ensues, Jim is torn between duty to his church and a desire to show grace. A ripped-from-the-headlines drama of suspense that keeps you engaged to the last page. Fallen is the story about Jim’s relationship with Dave—how Jim tries to do the right thing to keep Dave accountable, but finds the situation getting worse and worse. It’s also about Jim’s other relationships. Just as he discovers hypocrisy in Dave, Jim discovers his own sins against his wife and daughter. 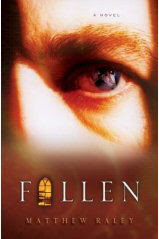