This week, the Christian Fiction Blog Alliance is introducing
THE DEAD WHISPER ON (Bethany House July 1, 2007)
by T. L. Hines

ABOUT THE AUTHOR:
Tony is the author of the acclaimed Waking Lazarus. He has been an advertising agency owner/principal, a trade amgazine editor, and now a novelist.He has been a professional writer for more than 15 years with articles appearing in publications as varied as Log Homes, Conservative Theological Journal, and Travel & Leisure. He is also Creative Director at Montana's largest advertising agency.His long list of past odd jobs includes trimming Christmas trees, sorting seed potatoes, working the graveyard shift at a convenience store, and cleaning cadaver storage rooms.As a teen he was undefeated in air guitar competitions in which he performed songs by ZZ Top.He lives in Montana with his wife and daughter.
ABOUT THE BOOK:
Would You Run Into A Burning Building?Candace "Canada Mac" MacHugh lives a ghost of her former life.Once a proud Butte, Montana, miner who daily risked her life setting explosives, she's now a garbage collector in her dying hometown.Her beloves father is dead and she doesn't speak to her mom. More than anything, Candace Mac misses her father. He promised to contact her from the "other side" if he could...but it's been eleven long years. And now even her beloved city of Butte, Montana, seems to be dying off.Candace Mac is alone. Longing for the past. Dreaming of making a difference.Until one night when her father's voice speaks to her from the shadows. Bud MacHugh's trademark growl. The dead, it seems, have messages they hunger to share with the world...warnings of impending disasters and grave danger. Of cities doomed to burn.But they need Canada's help.T.L. Hines' first novel, Waking Lazarus was named one of the Library Journal's Top 25 Genre novels of 2006. Now he's back with a gripping suspense that brings to light our fears and asks us if we still have the courage to fight for those around us. if we have the guts to be one of those who run into burning buildings.
"Chilling!" Publishers Weekly
"...a well-paced suspense populated by dynamic characters." Kirkus Discoveries 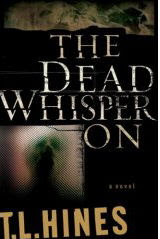